The secret to making hardcore fans happy is in the matchmaking. Stars will come and go and eventually rise to the level of their abilities, but the key to a sustained schedule of quality action is to keep the second and third tier fighters busy with well-made bouts.

For instance, last week’s Friday Night Fights card featured faded former champ, Jose Luis Castillo against club fighter, Ivan Popoca. The pairing resulted in a quality battle between two fighters who would likely be blown away by even the most fringe of fringe contenders. Quality matchmaking, from top to bottom, is basically just a matter of making the most of the fighters willing to step in the ring. 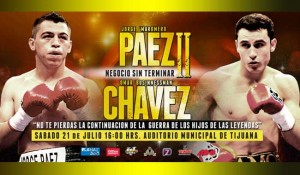 Last December, Jorge Paez Jr. (31-4-1, 19 KOs) and Omar Chavez (28-1-1, 21 KOs) put on an entertaining ten round junior middleweight scuffle for the benefit of the fans at the Arena Jorge Cuesy Serrano in Chiapas, Mexico and for the TV Azteca viewing audience in Mexico. Paez Jr. would come away with a hard-fought majority decision in the battle of second generation stars and the fans walked away genuinely entertained.

While it’s easy to dismiss fighters like Paez and Chavez, who get a disproportionate amount of attention in relation to their relative skills and accomplishments, they made something special together. Paez-Chavez, as a boxing match, was infinitely better than the sum of its parts.

Paez, the better boxer of the two, controlled the distance and used his superior hand speed to get the best of the action for much of the contest. But Chavez, who was bigger, stronger, and more athletic, pushed forward and had his best moments when he could bully the naturally smaller Paez. Ultimately, though, Paez’s skills made the difference and he would take the majority decision by scores of 99-93, 99-93, and 95-95.

Now, after one journeyman tune-up bout apiece, they’re set to face each other again, this time at the Auditorio Municipal in Tijuana, Baja California, Mexico with the preposterous, recently manufactured WBC International Silver light middleweight title at stake.

The business behind the bout is solid. Simply put, this is the biggest winnable money bout available to either fighter.

The 22-year-old Omar Chavez, as the son of Julio Cesar Chavez, is more commercially viable than 24-year-old Paez Jr., son of popular featherweight champ, Jorge “El Maromero” Paez. Chavez’s promoter, Zanfer, hopes to follow the same path they did with Julio Cesar Chavez Jr., who was brought along very carefully as a minor money maker until he actually developed into a legitimate professional.

However, Omar, at least in the initial stages of his career, didn’t show the fighting instincts that Julio Jr. did. There were several moments in his early days as a professional where Omar’s instinct upon being hit was to turn away and shrink back into the background. One got the feeling that it was Julio Sr.’s will from ringside that pushed him through those moments and, maybe, even kept him from quitting.

“I learned a lot of things,” Chavez said of his first fight with Paez Jr. “First, [I learned] that I could lose. That I have to train hard. I learned a lot. It was a ten round fight that put a lot of pressure on me, it was hard, it was taxing on me, but it all served to make me hungrier and to fight harder to not lose again, to not allow my dreams to come crashing down.”

For Chavez, Paez is the obstacle standing between him and moving forward in a career that is already buried in two prodigious shadows– that of his father and, now, his older brother. As if to assert his independence, Freddie Roach has been removed from his corner, replaced with  Manuel “Chato” Morales and conditioning coach, Julien Chuen. The pressure is there for the perpetual son/kid brother and only time will tell if he can fight his way into making a real name for himself.

For Paez, the expectation is the same as when he first signed to meet Chavez last December. He’s being offered up to Chavez as a token name on a resume and as a way to win the approval of a discerning Mexican fan base. Having won the first bout, Paez is not finding bigger things awaiting him. Instead, he’s being made to do it again. Chavez is the money fighter in the equation and, as such, is being given every opportunity to redeem himself. Paez, as is the case with most underdogs at the lower levels, will have to prove himself time and time again before actually being allowed to move on. Rocky Movie fantasies aside, boxing is simply not friendly to those fighters who flip scripts and upset marketing plans.

“I hope Omar gets in the ring well-prepared and he comes with the mentality to win and to put on a good show,” Paez told media. “Because, like that, the people will come out winning and I will win more convincingly. That [first] victory over Omar filled me with motivation. Now, I’m a more dedicated fighter. We’ve put nothing but heart and dedication into preparing for this fight.”

Saturday, Paez and Chavez will step back into the ring, both feeling the pressure to forge their own identity and justify their very presence in the sport their fathers conquered. Omar, despite the loss in their first encounter, is still supposed to win. Paez, the victor last December, is still supposed to be the first legitimate conquest on Chavez’s young ring record. The actual winner will be the fighter who can best withstand and overcome his own personal pressures. Expect a battle and expect drama.

That is the very definition of quality matchmaking.