Cincinnati, Ohio– Adrien Broner was forced to give up his WBO super featherweight title today as he was 3.5 pounds over the 130 lb. limit and unable to make weight within the extra hour given to him. His opponent for Saturday’s bout, Vicente Escobedo, did make the weight and will become champ should he beat Broner on Saturday. Should Broner win, the title becomes vacant. 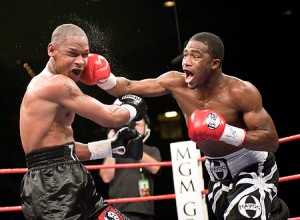 To prevent re-hydration and too much of weight advantage on fight night, Broner will also be weighed tomorrow morning and, should his weight exceed 140 lbs., the bout will be officially cancelled.

The Cincinnati native, Broner, told media earlier this week that this would be his last bout before moving up to the lightweight division.