Auditorio Municipal, Tijuana, Baja California, Mexico– The rematch between the two second generation fighters was less entertaining than their first encounter, but it produced a much more decisive winner as Jorge Paez Jr. (32-4-1, 19 KOs) solidly and unanimously defeated Omar Chavez (28-2-1, 21 KOs) in their ten-round junior middleweight bout despite oddly close scores of 96-94 all the way around. The victory affirms Paez’s majority decision win last December. 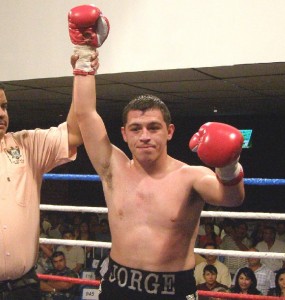 Since their last contest, only Paez had improved, fine-tuning his defense and adding a feint that fooled Chavez every time he used it. Paez even added a bit of his father’s flair as he moved a little in the later rounds and used a modified bolo punch with great success.

Chavez, still more athletic and heavier-handed than his rival, looked stupefied and befuddled by Paez and clearly gave away the first half of the ten-round bout. Usually backed up against the ropes and taking shots, Chavez would likely have been stopped if Paez had even the slightest hint of power. Instead, he was peppered with rapid flurries that deeply bruised the left side of his face.

In the second half of the fight, Paez took his foot off the gas, seemingly well in control of the bout, and lowered his punch output. Still, Chavez was unable to establish himself and, seemingly, clueless as to how to turn the tide.

The three judges’ scorecards did not indicate the true one-sided nature of the bout. After ten rounds, The Boxing Tribune scored the contest 99-91 for Paez Jr.