This Friday on the opening TV bout of ESPN2’s Friday Night Fights super middleweight Farah Ennis (19-1, 12 KO) out of Philadelphia gets his first shot to show his abilities on TV.  He takes on Richard Pierson (11-2, 8 KO) on the undercard of Hank Lundy vs. Raymundo Beltran.  I caught up with Farah along with John Disanto of Philly Boxing History this past week at his father’s gym in the Germantown section of Philly to talk about the upcoming opportunity.

Ennis is appropriately named the “Quiet Storm”.  He is a soft spoken and mild-mannered guy outside of the ring but is capable of bringing excitement inside the squared circle.  Farah is polite as he gives answers to questions but mainly focuses on his training and preparation for his biggest opportunity thus far as a pro.  The fighter who has produced some exciting wins and knockouts for Philly boxing fans talked about what he brings in the ring.

“Working my jab, you know, boxing.  Great defense, not trying to get hit by too many punches.”

Ennis comes from a boxing family as his father was a fighter and his older brother Derek Ennis is a good professional as well.  Farah got off to a hot start in his career, winning his first seventeen fights as a professional.  Ennis hit his first and only stumble back in April of 2011 when he dropped a majority decision to unbeaten (at the time) Alexander Johnson.  Ennis talked about being sick the week of the fight and how that cost him his undefeated record.

“It was really rough.  I was sick going into that fight.  The Monday before the fight I caught a cold.  I was jogging, waiting for a couple of my 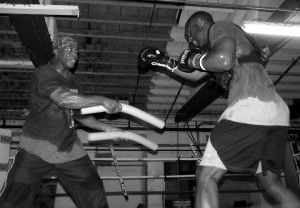 partners I was running with and caught a cold.  I was taking a whole bunch of different stuff and that’s really the only reason why I think, really, I let that guy outwork me.”

While Ennis has no regrets about fighting sick ,understanding this is his job as a fighter, he also learned to not make the same mistake in the future.

Following the loss, Ennis was out of the ring for nine months as he adjusted to several things in life including a new job and healing from a head butt in the Johnson fight that left a cut.  He returned with a convincing fifth round knockout of journeyman, but previously never stopped Grover Young in January of this year.  Ennis then won a unanimous decision in March over Shujaa El-Amin who was 11-2 at the time.

Now Ennis gets the opportunity fighters look for at this point of their career.  Friday night he meets another fringe contender in Richard Pierson on the ESPN FNF stage.  Ennis chooses not to focus on his opponent and just stick to his own preparation.

“I don’t really know nothing else about him (other than he beat two Philly fighters Jamaal Davis and Charles Hayward).  Just two things on YouTube but that’s about it.  Just training, get in shape, adjust when we get in there.”

Pierson is known as a good puncher but Ennis doesn’t let this affect his preparation.

A win and good performance would announce Ennis to a national audience.  Ennis has developed a good following in the regional Philadelphia area but this gives him the ability to show his skills for a live national TV audience.

As stated above, Ennis is not the type to ramble on with quotes.  He keeps it simple but clearly is looking forward to the chance to fight on TV.

“I mean it’s my first time on national TV.  I’ve been waiting for something like this so I’m just going to display all my skills.  Hopefully put on a good show.

“Yes, a step further, people that have never seen me get to see me fight.  You know, just getting out there.  I just want to show I can be in there with some of those top guys.  I just want to go forward.”

We asked Ennis if he feels pressure to not only win but put on a show that will make him more marketable for future TV opportunities.  He wants to look good but knows winning comes first.

“It’s not really no pressure.  I’m just going to go out there and handle my business.  I want to just win, you know, I want to look good, but just going for the win.

While Ennis is the “Quiet Storm” he is not devoid of a personality by any means.  He trains with intensity but with a smile on his face as he works with father and trainer Bozy Ennis.  Both get down to business but do so, enjoying a good time.

During the training session Ennis works with a weight vest strapped on.  While I was buried in a camera at one point of training, I was startled by a smashing thump in the ring.  I looked up to realize that the sound was the weight vest being taken off and tossed to the ring.  I asked Bozy 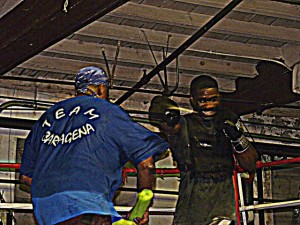 how much weight he was carrying in that vest and dad laughed stating, I don’t know what he puts in there.

I went over to inspect and upon lifting the vest realized he had to have been training with around thirty pounds on his back.  Then I got my second startle as I found the quiet but joking Ennis dancing on his toes behind me to announce “I move around pretty well in that, huh?”

With Philadelphia boxing experiencing a resurgence, Ennis has the chance to push himself into the mix with a big win on TV.  He has watched as Danny Garcia won a title and then shocked everyone with his recent KO of Amir Khan.  Philly fighters including Gabe Rosado, and FNF headliner Hank Lundy are emerging as contenders.  Ennis in his quiet way is excited to be part of this time in Philly boxing. He wants to join the fun but is not hurrying to get to the top.

“Hey, I’m excited, I’m ready for that.  I would like to be among all that.  I want to just keep winning, that’s all.”

Ennis will be the favorite Friday and will have the crowd support when the cameras roll.  He may bring the action in the ring but other than a pleasant smile don’t look for the “Quiet Storm” to blow away the post-fight interview.

“No, [it’s] just a great opportunity.  I just want to thank ESPN for giving me the opportunity to fight on there.”