Former two-time Cruiserweight champ Steve “USS” Cunningham is making the choice that many other successful cruisers before him have made by choosing to enter the heavyweight division.  Cunningham had speculated for some time that he would be moving to heavyweight, but today he made the move official and also has officially announced he is signing with Main Events Promotions. 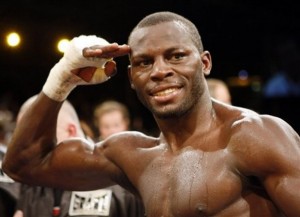 Again, Cunningham would make one successful defense.  He defeated Enad Licina.  Cunningham then dropped a highly disputed decision to Yoan Pablo Hernandez in October of 2010 where the fight was stopped due to cuts on Hernandez from head butts even though the cuts were barely bleeding at the time.  Most observers had Cunningham ahead on the cards, but the judges awarded the decision to Hernandez.  Cunningham would then drop a decision in his immediate rematch with Hernandez earlier this year which was his most recent fight.

Despite the success, Cunningham had difficulties with promoters and finding fights in the United States.  After breaking from promoter Don King he chose to sign with European based Sauerland Events.  With the cruiserweight division being an afterthought in the states, but generating big money and crowds in Europe, Cunningham hoped Sauerland would bring him the opportunities he was craving.  Things never panned out though as Cunningham found himself just as inactive as when he was with Don King and when he fought it was in hostile territory in Europe against homegrown fighters with all the advantages.

Now Cunningham will seek the opportunities he has desired by fighting north of 200lbs.  In addition, he will be promoted by Newark, NJ based Main Events who has a history of developing fighters into fan attractions.  Most recently, Main Events developed former Cruiserweight champ and now heavyweight Tomasz Adamek into a giant crowd draw in Adamek’s adopted hometown of Newark by capitalizing on the popularity of the Polish fighter and the large contingent of Polish descendants living in the Newark area.  They will now look to develop Cunningham into a draw in his home area of Philadelphia and produce a viable heavyweight contender in the process.

Cunningham has fought only one time in Philadelphia early in his career.  The only other bout he had remotely close to his home city was the fight with Adamek in Jersey where Cunningham was hardly the home fighter in Adamek’s home territory.  Considering Cunningham is a well-spoken and likeable individual combined with being someone who served his country in the Navy, he should be easy to promote and gain attention now that he is in the glamour division.  In addition with Philadelphia boxing seeing resurgence with Danny Garcia, Gabe Rosado, Bryant Jennings, and Hank Lundy all either with titles or making loud noise, Cunningham can ride the momentum of building a new boxing fan base in the area.