Friday night “Hammerin” Hank Lundy (22-1-1, 11 KO) again takes his brand of boxing and showmanship to ESPN Friday Night fights.  Lundy has become a staple of the FNF series with his flair for always producing exciting action.  He is coming off a dominating win over Dannie Williams on FNF in his last bout where he came off the canvas in round one to dominate the rest of the fight. 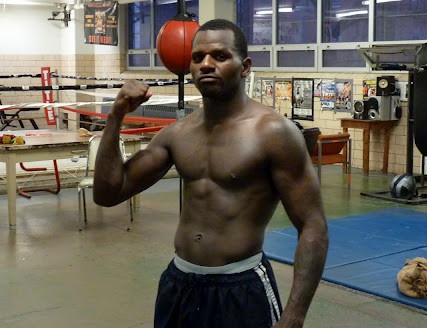 This Friday, Lundy will take on veteran trial horse Raymundo Beltran (25-6, 17 KO) as he stays active awaiting an opportunity for a title shot on HBO or Showtime.  Lundy will be fighting in what is somewhat unfamiliar territory.  He will be in Atlantic City only a little over an hour from his hometown of Philadelphia.  Lundy has fought only six times near the Philly area (the last time being nearly three years ago) so he has the opportunity to showcase himself on TV again, but also in front of his hometown fans who are expected to pack Resorts Casino in AC.

The Boxing Tribune caught up with the always outspoken and interesting fighter this week to talk about this Friday and his future plans.

Boxing Tribune: I wanted to start by talking about your last fight a little bit.  A lot of people saw your fight with Dannie Williams as a dangerous fight because of his power and knockouts.  What was the difference in the fight that allowed you to dominate the bout after the first round?

Hank Lundy: Well you know a lot of guys were building him off his punching power and you know, at the end of the day I looked at his record and I say he ain’t fought nobody.  I mean my last guys alone have a hundred and something wins and eight losses.  The level of competition he had, I looked at it and it didn’t excite me or put no fear in my heart.

BT: In that fight with Williams, you go down in the first round.  How hurt were you, what were you thinking, and what allowed you to turn things around to control the rest of the fight?

HL: Well you know I wanted to see how hard he was punching first of all.  He hit me right on my temple.  My glove touched, I didn’t really go down, my glove touched.  I wasn’t really hurt and I just laughed at him after I got hit with the shot.  Then I went into another gear because I seen in his eyes he was scared.  I knew in his eyes everybody he touched he was knocking out but when he touched me I didn’t go nowhere; he was scared so I knew I had him.

BT: From that point what allowed you to control basically every round the rest of the way?

HL: Just be focused, sticking to the game plan.  You know I’m a veteran in this game, I’ve been down before.  You know falling down, been down, getting dropped, it doesn’t mean the fight is over and I clearly showed the world that.

BT: You’re on the verge of a title shot as well as a chance on HBO or Showtime, so why take this fight right now and risk having something happen in a stay busy fight with Raymundo Beltran?

HL: Well you know I’m not overlooking Beltran.  Beltran is a solid opponent.  His last two fights were winnable fights you know.  I was checking the tape and I thought he won.  But you know Beltran he’s going to come.   He’s going to bring it.  You know me, like I’m used to taking on the toughest guys.  I can’t fight bums like half of these guys out there now.  They fighting a lot of tomato cans but I can’t do that.  Hammerin Hank won’t do that, I can’t do that.  I won’t disrespect the sport.  I’m like an old throwback fighter. You give me the best and I’m gonna show you what to do with it.

BT: You have always seemed to pride yourself on being a throwback fighter and being more like the old school fighters.

HL: Yes, you know there’s a lot of things out here that I see with these fighters coming up now if you take them back to twenty one rounds or fifteen rounds they wouldn’t know.  That’s how I am.  You know a sparring session I have three, four, or five guys and I’m actually going fifteen, sixteen rounds in the gym.  You know I’m taking it back to old school times.  I wish boxing could go back to fifteen rounds, to championship rounds.  These guys wouldn’t last.

BT: You have fought so many times on Friday Night Fights and become a real fan favorite of the series.  What does that mean to you to be so well liked to fans of the series?

BT: Most of your fights have been outside of your local area.  Are you looking forward to fighting close to home in Atlantic City?

HL: You know it feels good, but at the end of the day I still have to go out there and take care of business because most Philadelphia fighters, you know when you come to your own city and fight they get beat because they try to live up to the expectation they are trying to live up to.  You know I’m glad I’m coming home but like I said I got business to do.  After this fight I fight for the WBC world title so I got to handle business.

BT: Do you look at it that you are glad to be at home and have fans, but once you are in the ring forget all that and think of it as the same as being in any other place for a fight?

HL: Exactly, my whole boxing career I’ve been on the road.  You know I’ve never been at home or you know, fighting in Philly.  So you know at the end of the day I’m always on the road fighting so you know that’s what I’m looking at this fight as.

BT: After Friday what’s next for you?

HL: Well after this fight there’s a possible fight with Adrien Broner.  You know he’s coming up to my weight class.  Theirs a possible fight with him and I would welcome that fight.  I’m ready for that fight, but I’m in line next to fight for a world title so that’s what I want, the world title fight.  The WBC title, Demarco, so I’m waiting on the winner of Antonio Demarco and John Molina and I’ll fight the winner of that.

BT: Would you welcome a rematch with Molina?

BT: Who are you picking to win Demarco-Molina?

HL: Well I’m going with my gut feeling; I’m going with Demarco all the way.  You know after Molina fought me it took a lot out of him so I’m looking for Demarco to win that fight no problem.

BT: Hank, thanks for taking the time to talk.  Is there anything else you want to add?

HL: Well you know, I’m a put it like this, I’m a thank everybody for supporting Hammerin Hank you know, being by my side.  You know the possible fight everyone’s talking about is me and Adrien Broner you know, I’m ready for that fight.  Like I said first and foremost I got to take care of business Friday night on ESPN and you know how I always kick it off.  Hammerin Hank coming to a city and town near you.  It’s hammer time.