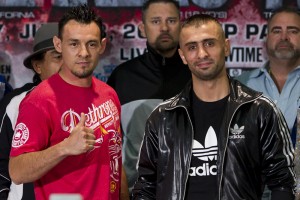 Robert “The Ghost” Guerrero (29-1-1, 18 KOs) will take on little-known, but hard-hitting Selcuk “Mini Tyson” Aydin (23-0, 17 KOs) on Saturday night at the HP Pavilion in San Jose, California. Showtime Championship Boxing will televise the action beginning at 10 PM ET/7 PM PT. A duplicitous version of the WBC (Interim) welterweight title will be up for grabs in what the winner will hope may eventually lead to a money fight against Mayweather, who has been made“Champion Emeritus” while he is away in jail.

Aydin, of Trabzon, Turkey, is fighting in the United States for only the second time in his career. Aydin has long been something of a darling of the WBC, having held their International Title for nearly 28 months before capturing the more prestigious of the second-tier WBC titles, the Silver Title, against Jo Jo Dan in 2010. Aydin’s 2010 fight with Dan ended in a close, debatable split decision, but Aydin won by a more comfortable margin in their rematch last November.

Guerrero has been out of action since last April when he rearranged the face of Michael Katsidis en route to a wide unanimous decision victory. A shoulder injury suffered while training for last year’s proposed fight with Marcos Maidana put him on the shelf. Guerrero has won world titles in the featherweight and super featherweight divisions, and his victory over Katsidis reeled in two more Interim titles (for those who choose to count Interim titles) in the lightweight division. In capturing the Interim WBC welterweight title, Guerrero hopes to force a mandatory defense against Mayweather in the near future.

Six months ago Guerrero and his team tried a different tactic of getting the number one cash cow into the ring. You couldn’t go to a boxing website without seeing Robert Guerrero’s name in a headline involving Floyd Mayweather’s then-open May 5 fight date. The talented former featherweight and super featherweight champion, with the help of his extremely dedicated publicist, Mario Serrano, was all over the news being discussed as a potential Mayweather opponent. You wanted to root for Guerrero to get the fight. Guerrero has always been a classy competitor, and having to step away from boxing to care for his cancer-stricken wife has made him a guy you can root for.

The publicity drive was all for naught in the end, as Mayweather chose to move up to the jr. middleweight division and challenge then-WBA champion, Miguel Cotto.

Now as Mayweather sits in a Nevada jail cell awaiting his release, his status as WBC welterweight and WBA jr. middleweight champion has both titles tied up in limbo, as neither organization is willing to suffer the financial windfall that will result from parting with a Mayweather sanctioning fee. When he returns he will be given the luxury of choosing to continue his career at the jr. middleweight level or moving back down to welterweight, where he may or may not be asked to make a mandatory defense against the winner of Saturday night’s Showtime Championship Boxing Main Event.

If Guerrero’s plan comes to fruition on Saturday night, it is he, not Selcuk Aydin, who will be put in position for a future fight with Mayweather. It would be foolish to think Aydin does not share the same hopes as Guerrero. You can bet that Aydin, the element of chaos in this tale, won’t roll over and die so it all goes “according to the plan.”

Conventional wisdom will lead us to believe that Guerrero, a long, tall southpaw with a sharp jab and hard straight left hand will have no problem in keeping the more compact Aydin at bay. Guerrero had little trouble in stifling the usually effective blitzkrieg attack of Katsidis, and he was crafty enough to cruise to an easy victory over the lanky Vicente Escobedo in 2010. But those victories were at the lightweight limit of 135 pounds, where Guerrero’s power could stop you in your tracks and he was talented enough to outbox someone of similar frame and length. Guerrero is jumping up two weight divisions (12 pounds) against a powerful opponent who has spent his entire career at 147 pounds. The big question mark coming into the fight is whether or not Guerrero’s power will move up with him. If he left much of his power behind, he’ll have a hard time discouraging a hard-charging Selcuk Aydin and he may be in for a long night.

Robert Guerrero is once again looking ahead to a possible career pay day with Mayweather, but in the weeks leading up to the fight he has appeared focused on the task at hand. 2012 has been a year of upsets for guys looking ahead to potential big money fights – just ask Victor Ortiz and Amir Khan. It’s always a great story when the underdog upsets the established order and turns their plans upside down. Will July 28 be another night for chaos, or will Guerrero restore order and move on the bigger, better, and richer things?