Former IBF super middleweight titlist Lucian Bute (30-1, 24 KOs) has announced his next fight. He will take on Russian light heavyweight Denis Grachev (12-0-1, 8 KOs) at Bell Centre in Montreal on November 3rd, at a 170-pound catchweight for the NABF light heavyweight minor title that Grachev won from Ismayl Sillakh on ESPN2 earlier this year. 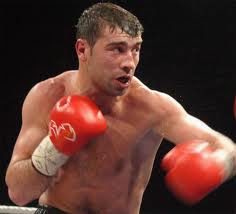 For Grachev, this will be by far his highest-profile opponent. Ismayl Sillakh was a legitimate up-and-coming contender, a fighter The Boxing Tribune picked as its most likely 2012 breakout star in our 2011 year-end awards. Grachev stopped Sillakh in eight rounds in a Friday Night Fights main event, exposing Sillakh’s defensive weaknesses for all to see and perfectly exploiting an Achilles heel to his own advantage.

Speaking of exposed fighters, Lucian Bute’s chin, which had been rendered suspect by Librado Andrade in the infamous hometown long-count fight in Montreal in 2008, finally met its match when Carl Froch sent thunderous punches crashing home en route to a fifth-round knockout of the previously unbeaten Romanian. Bute is scheduled to fight a rematch with Froch next year, but he must first show himself capable of beating a fighter who is apparently skilled at finding and exploiting an opponent’s weakness.

The Boxing Tribune will have full coverage of this fight as fight week brackets the Halloween witching hour; stay tuned to the only major boxing news source not funded by promoters or managers.