Boxing Tribune Editor-in-Chief Paul Magno is on vacation until August 12, so “Magno’s Monday Rant”, the one column openly reviled by the Boxing Writers Association of America, will be absent until his return. In its place will be “Portions of a Scotch-Stained Notebook”, an actual, physical notebook I keep notes and thoughts in throughout the week (and yes…I spilled my scotch on it while watching the Amir Khan-Danny Garcia fight in a bit of a stupor). For the angry blogger with the pile of jizz-stained 50-year old copies of Ring Magazine who will almost surely brand me a thief for “lifting” the title, it is indeed an homage to Charles Bukowski’s “Portions of a Wine-Stained Notebook”, from a far less talented, but far better-looking writer.

The recent news that rapper Curtis Jackson, aka 50 Cent, would throw his hat into the ring as a boxing promoter has danced at or near the top of the news cycle for the last few days. “The Money Team” (TMT), as 50’s company will be called, rushed out of the gates with the news that former Olympians Andre Dirrell and Yuriorkis Gamboa signed exclusive deals with TMT, prompting Golden Boy Promotions president Oscar De La Hoya to take an underhanded swipe at 50 via his eccentric Twitter account (although not directly to 50’s Twitter handle). 50 responded by letting De La Hoya know that TMT was the new sheriff in town (not in so many words; he called De La Hoya “sweetheart” a few times) and they would be looking to make big moves in the business. He even hinted that TMT, not Golden Boy, would be promoting Floyd Mayweather’s future fights. 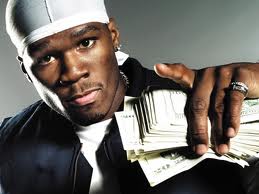 TMT capped off the week with the signing of IBF featherweight champion, Billy “The Kid” Dibb, and it appears as though the strategy with which they will approach the acquisition of talent will be aggressive, to say the least. However, several questions regarding the structure and long-term goals (if any) have yet to be answered.

It would appear that 50’s veiled threat of stealing Mayweather’s services from Golden Boy is more than just a threat at this point, and Mayweather will be fully on board when TMT is ultimately up and running. One big question will be whether or not influential advisor Al Haymon will have any involvement with TMT. Will the man behind the curtain be left behind to tend his own shop, or will he be brought into the day-to-day dealings of TMT?

One of the main points of contention that the members of the big boxing media have with Haymon is that he gets his clients big money for soft touches. Haymon’s business is a double-edged sword, as it bucks the trend of the sleazy, diseased, empty suits who have made piles of money robbing their fighters blind, but it has watered down the final product of the premium networks who have found themselves bent over the negotiating table in front of Haymon. Will TMT replicate some of Haymon’s work and have Andre Dirrell, Yuriorkis Gamboa, and Billy Dib fighting undeserving scrubs at a premium price, or will TMT work to improve their product?

The signing of Dirrell and Gamboa says that TMT is serious about this endeavor and won’t be in it just for the sake of promoting Mayweather’s fights. But will TMT be in it when Mayweather eventually decides to hang up his gloves and sit behind a desk, or will TMT shutter its doors and leave a big power vacuum, anxiously waiting to be filled by another power player?

With so many lingering questions surrounding “The Money Team”, one thing is certain: 50 Cent is a savvy and successful businessman. The former drug dealer who survived nine bullets before his rise to fame as a rapper, has a long line of achievements in the world of entertainment. In addition to several chart topping albums, 50 has starred in a movie loosely based on his life, shared the big screen with legends Robert DeNiro and Al Pacino in “Righteous Kill”, produced a line of clothing and shoes named after his “G-Unit” record label, provided voice-over work for a video game featuring his likeness, created a Vitamin Water flavor, and a condom line called “Magic Stick Condoms”.

50’s influence in the music and entertainment industry can be a powerful sword to wield in changing the structure of how fights are promoted and fighters are paid, not to mention the direct line of access he’ll have with a long list of A-listers (and I’m sure some shady D-listers will be there as well…*cough* Kim Kardashian *cough*). A recent interview at RingTv.com illustrates how Andre Dirrell has already been a witness to a new way of doing business.

A famous recurring line in the Spider-Man mythos comes to mind here: “With great power comes great responsibility”. We can only hope that with this potentially great power, 50 has gotten into this game we love and loathe to make some positive changes, all the while adding to the mountain of cash accumulated through the work of his vast business empire, and he isn’t merely looking to cut and run.

You can email Tim at timharrison65@gmail.com, or follow him on Twitter at www.twitter.com/TheTimHarrison, where he’s closing in on 1,000 followers and will be giving away a Jamba Juice gift card with $9.45 still left on it when he reaches the milestone.