The world has been beset by a woeful procession of dreary American heavyweights these last few years, and it has become a pretty depressing sight observing the robotic Klitschko brothers beating up fat, aging, unambitious big men who’s predecessors had made the richest prize in sport part of their country’s furniture. 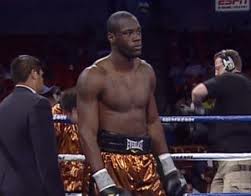 That might be changing soon, with the fast-rising Deontay Wilder four years into a professional career that promises a great deal. The 26-year old Wilder is a modern Western heavyweight rarity – a fighter with a sleek, athletic physique, fast and heavy hands, and the speed and spite needed to end fights early, as evidenced by the fact that Deontay is yet to be taken the distance after 23 paid fights.

Okay, Wilder is yet to be tested to any degree, and his three round demolition of Owen Beck a month or so back represents the only “name” opponent on his record (even if Beck had lost seven of his eight previous fights by stoppage). Wilder is 6 feet 7 inches tall, so would look the Klitschko’s squarely in the eye, but at 220 pounds he’s a deal lighter than most big heavies- which may in fact be an advantage against your average Eastern European statuesque behemoth.

Wilder is a fast learner. He didn’t lace on a glove until he was 19 years old, and within two years he’d progressed to the Olympic trials where he made the US team despite having only 21 bouts under his belt. Wilder went to Beijing and overcame a chronic lack of experience to walk away with a bronze medal. He turned pro in November 2008, and quickly rattled off 14 victories, 12 of them within a single round.

On Saturday night at the Exposition Hall in Mobile, Alabama, Wilder steps up a level when he takes on Kertson Manswell, 22-5, 17 KO’s in his first ten-rounder, and should he win, as expected, there’ll be a clamour to move him through the ranks and into world title contention. The 35 year old Trinidadian, Manswell is a puncher in his own right, and over the last couple of years has lost to decent opposition like Ruslan Chagaev, Mike Perez and Alexander Ustinov. He’s a fighter who tends to win early, or lose early. Matters could become interesting if Manswell manages to test Wilder’s chin, which has largely been untouched as Deontay has blown most of his opposition away. However, journeyman Harold Sconiers did manage to drop Wilder in their fight back in 2010, before succumbing over four rounds.

It seems unlikely that Manswell will be able to repeat that feat but he might provide Wilder with some uncomfortable moments before probably finding things a little too hot as the Bronze Bomber unloads his long right hand – I see Wilder forcing an end to the contest before the fifth round.