After nearly every news outlet ran with the assumed October jr. featherweight showdown between Nonito Donaire and Jorge Arce, it has been confirmed that Toshiaki Nishioka (39-4-3, 24 KOs) will get the nod on October 13 at the Home Depot Center in Carson, California. Arce, according to reports, has priced himself out of the fight. 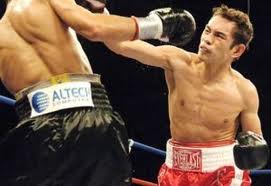 Nishioka has been on the shelf since beating Rafael Marquez last October, and was recently knocked from his perch atop the WBC jr. featherweight hierarchy to make room for Abner Mares. Nishioka won the title in 2009 when he scored a final-round stoppage over Genaro Garcia in Japan. He made 6 successful title defenses, including wins over Jhonny Gonzalez, Ivan Hernandez, Rendall Munroe, and Rafael Marquez.

Nonito Donaire, who captured the WBO title in February before grabbing the IBF title last month, has flirted with the idea of unifying the jr. featherweight (122-pound) division after beating Jeffrey Mathebula to take the IBF title. Since Nishioka holds a fraction of the WBC title (Champion Emeritus), Donaire may actually have a claim to undisputed status should he emerge victorious on Saturday, October 13.

The Brandon Rios-Mike Alvarado jr. welterweight fight (reported first here on The Boxing Tribune) will serve as the co-feature to Donaire-Nishioka.