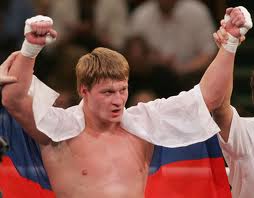 Rahman, 50-7, 41 KO’s, is entering his forties and his been dining out for far too long on a freak knockout of Lennox Lewis way back in 2001, when Lewis allowed his out of the ring activities to compromise his preparations. Rahman duly followed Oliver McCall into the record books as two painfully un-gifted heavyweight champions who were handed their titles courtesy of a fickle champion and a powerful lucky punch.

It’s difficult to see where Rahman has earned his title shot – sure he’s on a five fight winning streak, all of them stoppages within six rounds, and he has a “name”- but all six foes were and are strictly journeymen; in Rahman’s last meaningful fight (a frankly pathetic attempt to dethrone Wlad back in 2008 in which The Rock was tossed aside in seven soporific rounds) it appeared to all intents and purposes that his fighting days were over.

Povetkin’s 24 fight record remains unblemished but his reputation has taken a battering of late after he was stretched to the limit by cruiserweight hard-man Marco Huck in his last outing and amid rumours that he’s ducking the Klitschko’s. A small heavyweight by today’s standards at 6 feet 2 inches, Povetkin doesn’t carry the speed necessary to make up the gap to the modern behemoths so if he’s waiting for the Ukrainian brothers to move on he’s probably right to do so. He’s skilled enough that neither Klitschko will agree to fight him unless the fight contracts are ridiculously weighted in their favour, as is their wont, so Povetkin must, for the time being, feast on heavyweight dross. Rahman fits the bill nicely.

The 6 feet 7 inch Ustinov is no youngster at 35 years of age, and he’s racked up an awful lot of early wins against no-name Eastern European fighters, flitting between Russia and Germany, but he has a reputation as a man who punches his weight. Pulev has attracted a deal of interest since stopping highly-touted Alexander Dimitrenko in a bruising encounter in May, when Pulev out-lasted and out-pummelled his bigger opponent over eleven rounds. Pulev has fewer stoppage wins on his record, but he’s mixed in better company, and having despatched Dimitrenko he won’t mind giving away height, weight and reach to Ustinov.

Whether either man poses a threat to the Klitschko’s, or even to Povetkin, remains to be seen, but we’ll find out a great deal more about both fighters on September 29th.