Shawn “Manos de Oro” Estrada (14-0, 12 KOs) will take on Felix Piedra (8-0-1, 5 KOs) this Saturday at the Sportsman’s Lodge in Studio City, California. The fight is scheduled for eight rounds and will be contested in the light heavyweight division. 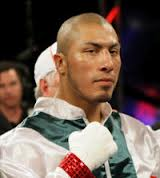 Estrada represented the United States at the 2008 Olympic Games in Beijing, but lost to Great Britain’s James DeGale in the preliminary rounds. His professional career began a few months later, and he ran off a string of 9 straight knockout victories to begin his career. Injuries have stalled Estrada’s career at various points. His most recent knee injury forced a long layoff and hindered his ability to make weight for his last fight against Terrance Woods (who also failed to make the 170-pound catchweight). Now healthy and injury free, Estrada is looking to get back on track.

There isn’t much known about Felix Piedra, aside from the fact that he’s fought each of his 9 professional fights in the state of Texas. Piedra’s opponents have all been pulled from the novice/club fighter pool up to this point, and he’s taking a huge step up in class against a former Olympian with a somewhat extensive amateur background.