Former top junior middleweight contender, Alfredo Angulo (20-2, 17 KOs), has been released from an immigration detention center in El Centro, California after a seven month incarceration and is reportedly targeting a return to the ring by the end of this year. 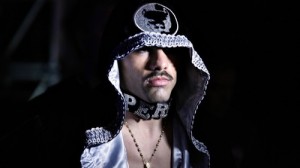 The Mexican national was last in action in November of 2011, when he was stopped in a six-round thriller by James Kirkland in Cancun, Mexico.

Various immigration issues have prevented the former Olympian from fighting in the United States since blowing away Joachim Alcine in one round back in July of 2010.