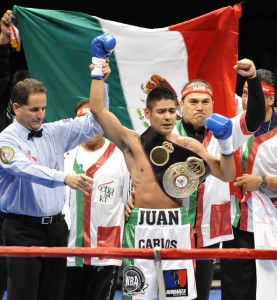 Salgado is making the second defense of the vacant title he won in a 12-round battle with Argenis Mendez in 2011. The lanky Mexican previously held the WBA’s version of the super featherweight title when he knocked out Jorge Linares in one round in 2009. Salgado lost the title in his first defense against Takashi Uchiyama. Salgado scored back-to-back wins over Guadalupe Rosales before getting his shot at the vacant title in 2011. What should have been Salgado’s first title defense was declared a no contest when an accidental headbutt forced the stoppage of his December 2011 fight with Miguel Beltran Jr. In his last outing, Salgado took a hard-fought majority decision victory over Martin Honorio.

Barros, from Mendoza, Argentina, is looking to become a two-division world titlist. Barros held one of the three WBA featherweight titles when he beat Irvine Berry in December of 2010. He made two successful defenses – one against Miguel Roman and one controversial victory over Celestino Caballero – before dropping a wide point decision to Caballero in the immediate return bout three months later. In his last fight, Barros traveled to Uruguay and beat club fighter Gustavo David Bermudez in June.