This may be a bold statement, especially considering the professional tenure of the subject, but here it is: The young and relatively inexperienced Deontay Wilder (24-0, 24KOs) is my new favorite heavyweight; Wlad and Vitali will want nothing to do with him. 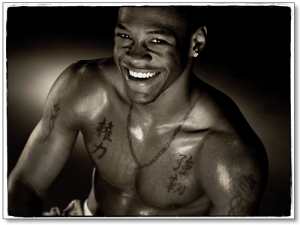 Though still quite crude, the “Bronze Bomber” (his nickname a nod to the Olympic bronze he brought home from Beijing in 2008…The sole boxer to medal from the States that year) has miles of potential and many attributes that the stellar Klitchko brothers have avoided in recent years. The argument whether their careful selections are by design or purely due to a lack of any formidable competition is obvious from both sides when you take a look at the current heavyweight landscape.

Deontay Wilder knows how to utilize every bit of his 6’7″ frame. He fights tall and usually behind an informed jab. He’s young, athletic and possesses a tremendous reach (84″!). He also has a terrific killer instinct and isn’t afraid to throw bombs in combination.

Perhaps the “Bronze Bomber’s” greatest asset inside of the squared circle is his impressive physique. The unbeaten Alabama native has the body of a football player (where, ironically, Roy Jones once said all the best American heavyweights were) and it was no coincidence that the former Olympic medalist once had collegiate aspirations to become a wide receiver.

Academia, as it turns out, wasn’t Wilder’s forte. He was eventually enrolled in community college due to his poor grades and began focusing on boxing instead of attending the University of Alabama where he planned to play football.

With the many alphabet belts tied up in the hands of the twin Ukrainian colossi, The 26 year old Golden Boy Promoted fighter has been busy paying his dues and padding his record with dramatic knockout victories.

All of Deontay’s performances have been electric and violent. And while his most taxing battles have only clocked in around the 9 to 12 minute mark, all his fights have ended in some type of concussive fashion. Though having all wins and all knockouts is impressive when the ring announcer calls your name, it would be in DW’s best interest to go some rounds with the long-time pros to glean some better professional insight.

Of course, who knows when Deontay WIlder will be matched against anyone with a pulse. This is largely due to overly protective match-making (or perhaps the “Tomato Can Syndrome” as highlighted by The Boxing Tribune’s own astute columnist, Fox Doucette, HERE) by Golden Boy. The kid has wings, let him fly.

It’s no secret that the Klitchko brothers, the long-time divisional kingpins, have been fed a steady diet of washed up no-hopers. Like the Klitchkos, Wilder has enjoyed massive advantages over his woefully outclassed opponents so far. It would be interesting to see how the brothers, who are so used to looking down on all of their opponents would deal with the gifts and advantages that DW brings to the table.

However, unless Deontay Wilder begins to appear in photos with the Watson twins or starts to thank Al Haymon or TMT in his next few fights, it is unlikely that the Klitchkos will seek him out as a potential opponent. Wilder’s speed, explosive power, height and range will make him too much of a threat for the image conscious brothers, but if you ask me, a changing of the guards is long overdue .