Believe it or not, boxing is a sport. And, yeah, there are still some of us who insist on treating it like a full-fledged sport and not as a series of randomly put-together exhibitions.

What this means is that I demand logic in terms of matchmaking and title structure, but who the hell am I, anyway? Who the hell are any of us?

Because nobody with any power or influence treats boxing like a real sport, we get situations where top fighters are simply not compelled to risk very much and the sport’s best match-ups get buried, even when there’s a clear and logical path to making them happen. Well, to be fair, many of the bigger fights eventually do get made, but not when they make sense and not when they could actually benefit the sport as anything other than one single payday on one single evening.

For active participants, not a single fighter wants to be seen as a “ducker” or “cherry picker” and nobody begins a career with the idea that they’ll someday be zig-zagging through soft touches en route to a paper title. Things just work out that way sometimes. And, given boxing’s non-existent centralized power and the con men who have seized control in the void, it’s logical that most every top fighter, at one point or another, will be accused of ducking and dodging.

Case in point is the junior middleweight division.

The 154 lb. class is bursting at the seams with talent and stands as a powder keg ready to explode, if only someone cared to toss a match at it.

Saul Alvarez, who is The Boxing Tribune’s top ranked junior middleweight, sits in the top spot, almost by default. In a boxing world run like a real sport, Carlos Molina would be the division’s #1 fighter because, presumably, a boxing that cares about boxing would’ve prevented his screwy DQ against James Kirkland and a truly questionable draw against Erislandy Lara. Of course, a case could also be made that boxing, cared for like it mattered, would’ve forced Alvarez vs. Cotto as well as Martirosyan, Trout vs. anybody to keep Molina out of the top spot. 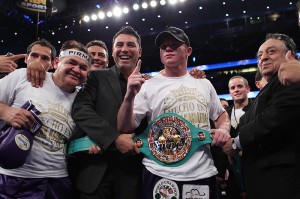 You just never know what’s going to happen when good fights are made and a real, competitive sports narrative is encouraged. And when the game is rigged and each promoter/manager is allowed to cheat the sport with the help of any of four corrupt sanctioning bodies and a salad tossing media?

Well, we get four or five champs, all with semi-legitimate claims at top dog status, but without a real chance at  proving their claims even if they wanted to. Then, it all comes down to which line of crap you’re willing to buy.

It’s like saying that the Yankees, White Sox, Rangers, Giants, and Reds are all at the top and now it’s the fan’s decision as to which team they want to endorse and which version of the World Series they want to support.

It always amazes me how some fans and media can actually support this chaos and actively deride and discredit attempts to establish something as fundamental as a fair and universally accepted ranking system.

Some website somewhere (the name escapes me at the moment) featured an article recently, asking the question of whether fans actually care at all about rankings.

Can you imagine MLB or NFL fans saying that standings don’t matter? Imagine the chaos if playoff positioning and world championship games were 100% determined by market value and backstage politics. Well, you really don’t have to imagine what a sport without structure looks like–  just take a gander at boxing where, more often than not, the fans are hustled through the mess like dupes through a 1930’s carnival freak show and the business model is more pusher/junkie than businessman/customer.

So, what would a real rankings system do for the sport?

Unless backed by some sort of power, the rankings would mostly be symbolic. But they would make it so that if a guy like Devon Alexander becomes a number one contender in one of the alphabet leagues, just because he signs with Golden Boy, a singular focus would be placed on the act. Think of it as a flashlight in a dark Brooklyn sewer drain, forcing the rats to scurry about.

At this point, that’s really the best we can hope for when it comes to reform in boxing– Put all the sleaze out into the open and keep shining a light on it until the crooks and carpetbaggers begin to feel an economic pinch from their dirty work. The idea is to keep the shady decisions from being made in sanctioning body boardrooms then gradually sold to the fans via complicit media until the hustle and con at the root of the story is buried so deeply that only bomb-throwing ne’er-do-wells (like yours truly) are up in arms.

The chaos that governs the sport now only benefits the sleaziest of the sleazy figures at the top of the food chain. A real structure would force real matchmaking. You better believe that this is the reason why everyone with any actual power is against (or ambivalent about) real and fair rankings.

But don’t count on the boxing writers to put together fair rankings or do any of the heavy lifting for real reform either because, frankly, most of them are in somebody’s pocket, have been in somebody’s pocket, or aspire to be in somebody’s pocket. Can we trust the decision of a scribe who goes on sightseeing junkets with Top Rank brass to fairly asses a Top Rank fighter? How about the fact that most big shot scribes are making their money because promoters and managers are sponsoring their sites?

What’s the answer, then?

It all has to be market based. Pissed off fans and self-sacrificing fighters will be the only impetus for change. If the fighters won’t fight and the fans won’t follow, the cheese for the big rats will disappear. Then, as the emaciated vermin start to fall away, some decent people have a chance at stepping in.

But the fans actually have to want a more activist role. Most just want to be customers and drift in and out when it’s time for the fights. So, unless there’s a change in this attitude, boxing will get what it deserves.

For those who care, there is a long fight ahead and I don’t even think most of us have the stomach for such a battle.

Personally, I have no answers other than to keep shining a light on the bull shit and throwing bombs at the crooks. As we’ve recently been told by members of the boxing media establishment, we’re  nobody here at The Boxing Tribune and nobody cares about the reform-minded things we write. So, I’ll leave all the activism in the hands of the big shots and self-congratulating experts. I’m sure they’ll get to all the solutions, once they polish off that last doughnut at the media buffet table.