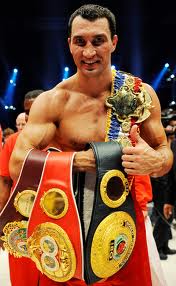 Klitschko has not lost since 2004 and is looking to extend his winning streak to 17 straight wins dating back to the 2004 loss to Lamon Brewster. During Klitschko’s long undefeated streak he has beaten every worthy challenger (and some not so worthy) to come his way, including a rematch win over Brewster, Sam Peter (twice), Chris Byrd, Calvin Brock, Sultan Ibragimov, Tony Thompson (twice), Hasim Rahman, Ruslan Chagaev, Eddie Chambers, and David Haye. Klitschko has already won twice in 2012, first against former cruiserweight Jean Marc Mormeck, and most recently against Tony Thompson. The signing of Wach as his November 10 opponent is a clear sign that there are few title-ready challengers left in the shallow heavyweight talent pool, while the young lions like Tyson Fury, David Price, Deontay Wilder, and Seth Mitchell ready themselves for (hopeful) future challenges at the heavyweight crown.

The Poland-born, New Jersey native Wach has very few wins of note on his resume. But that didn’t prevent him from being approved as a title challenger. Standing out amongst the long list of club fighters on his resume, Wach has logged knockout wins over Kevin McBride and Tye Fields, a former Prizefighter Heavyweight Tournament finalist.