The best lessons in life are learned by example. Show someone a strong role model, who demonstrates virtues to which we all can aspire, and somewhere in the process is found a blueprint for living a completely different walk of life.

We watch athletes in general and boxers in particular rise at five in the morning to get out and run five miles, spar six rounds and get off to their day jobs in construction or at the warehouse before the rest of us have even put the Eggo waffles in the toaster for breakfast. The saying in the Army goes that “we do more before seven AM than most people do all day.” The same would seem to hold true for the up-and-coming fighters in this world, working their asses off for the brass ring. 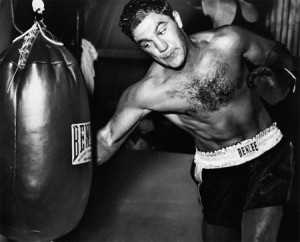 In the ring, a fighter must not only be constantly on his guard—protecting himself at all times, as it were—but must also be able to get hit and know how to react in order to avoid falling in defeat. On occasion, a fighter will hit the floor. In those situations, that fighter must not only get up within the prescribed ten seconds—remembering all the while to avoid giving the referee any reason to stop the fight—but must then come back even stronger in order to regain the momentum and snatch victory from the jaws of defeat.

For a fighter, winning the title is not the ultimate goal. Sure, getting the belt is a nice milestone, and it’s certainly a good sign for a fighter’s legacy, but it is far from the sine qua non of being a great fighter. The great ones hold the title and defend it tenaciously against all comers, providing the world with epic battles and title runs that plant their names on history as the men who were the true champions at their weight for years on end. The difference between Muhammad Ali and Ingemar Johansson can be ascribed to the difference between a 14-year title run and a single-fight run as champion that was punctuated by the dethroned champ seizing the title back by knockout in the very next contest (then, in the case of Floyd Patterson, leaving no doubt by knocking out Ingo in the rubber match of their three-fight series.) Bernard Hopkins and Carlos Monzon are thought of as great middleweights as much for their sustained dominance as for any one particular signature fight. Once we all get over how boring they are to watch, the Klitschko brothers will leave a similar mark on the early 21st-century heavyweight ranks.

All of the above qualifications are as important in life as they are in boxing.

It is often said that the early bird gets the worm, that championships go to who wants it more and that fortune favors the bold. This is as true in life as it is in sports. When we watch athletes get up insanely early to work on their craft, we can look toward our own careers, whether it’s in construction, accounting, sportswriting, or whatever else is out there.

A sportswriter who is not reading great sportswriting is a guy who is not improving as a writer. A writer relies on outworking and outhustling the other people in his walk of life in order to be the very best at what he does, and while there is no championship belt for sportswriters (a mention in the Best American Sportswriting anthology, perhaps), guys like Mike Wilbon aren’t famous for just showing up. Work went into building that skill.

Likewise, one of the oldest saws in the book for writers is “get used to rejection”. It is an unfortunate fact of economics that everyone thinks that they can write, but only a select few get to join the fraternity of those who make a living at it. Everyone is an unproven rookie at some point, and getting noticed can fall into the trap of needing a job to get experience but needing experience to get a job.

Your columnist got this gig by networking and getting his name out there; by the time our esteemed Fearless Leader looked for a guy who could string words into sentences for lunch money, I’d already heard my name mentioned on ESPN2 as a result of insightful commentary provided as much as a form of recreation as anything geared toward a greater purpose.

Capitalizing on a break is another key component here. Some guys get a taste of success and turn into Deontay Wilder, feasting on weak enhancements to a puffed-up but ultimately meaningless résumé and never getting to truly unleash their potential. Other guys are like 1986 Mike Tyson, stepping up, knowing that success breeds success only when it continually runs up against the best available challenges. A writer who has been paid and slums it for free—assuming the “free” work isn’t done with a purpose toward a later paying gig—is a writer who lacks ambition. When you’ve already won fights in the pros, why go back to the amateurs even if such a thing were possible?

Finally, there is the matter of sustained dominance. The writing world, as with the boxing world, is full of guys who are just itching for a chance to take the title away from whoever holds it. Everybody wants to be Bill Simmons, with a media empire and a huge paycheck from the biggest forum in sports. Even if they decry Simmons’ style—Drew Magary at Deadspin, I’m looking at you—there’s still the underlying motive to capture and own that demographic. In order to hold off a constant stream of challengers, the need to hone and refine the craft, tempered by years of experience, is still as strong as it is on day one.

Writer, fighter, the words rhyme and the styles have similar resonance. We cover some of the toughest badasses on the face of the earth. It would behoove us all to learn the lessons from the men we make into heroes for public consumption and practice what they preach.

Fox Doucette covers Friday Night Fights for The Boxing Tribune. His weekly column, The Southpaw, appears on Thursdays. Fan mail, hate mail, and some kind of workable metaphor for writers punching each other in the liver—too many beers at the bar, perhaps?—can be sent to beatcap@gmail.com.