Wales’ Nathan Cleverly (24-0, 11 KOs) will be four fights into a WBO world light heavyweight title reign when he faces the Ukraine’s Vyacheslav Uzelkov (27-2, 16 KOs) on October 27th at the Motorpoint Arena in Cardiff, Wales and the 25-year-old titlist is staying true to form– A fighter on the champion-in-training program whose title reign has yet to feature a true Top 10 opponent. 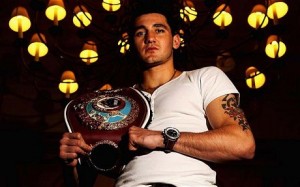 Team Cleverly is nothing if not consistent. Since becoming interim titlist in 2010, Cleverly has skirted the fringes of the dubious WBO rankings and picked all the right victims. In that sense, Cleverly is a true throwback fighter– bringing back the WBO of the early 90’s, a sanctioning body that often seemed to run interference for their champions by ranking weak, obscure opposition to serve as fall guys.

Most obnoxiously, though, fight fans are subjected to massive amounts of posturing before and after each of his bouts. At this point, no matter how much we read otherwise, Team Cleverly is simply not interested in fighting Hopkins, Shumenov, Cloud, Dawson, Pascal, or anyone else that might overturn the gravy train.

To be fair, Uzelkov is no pushover, at least not to the degree of Karpency or Mohammedi. He has, however, competed almost exclusively on the Eastern Europe soup kitchen circuit. The 33-year-old still hangs his reputation on a sixth round knockout of Gabriel Campillo back in 2007, but has had that one gem diminished greatly by unanimous decision losses to his only two other opponents of note, Beibut Shumenov and Eduard Gutknecht in 2010 and 2012, respectively. It’s not that Uzelkov is that bad, but really, he should be the gimme in a world champion’s reign and not the high water mark.

As for Cleverly, another lackluster match-up threatens to further stunt his growth as a fighter and stop him from becoming anything other than a protected regional world titlist. Cleverly has the potential to develop into a true world class fighter, but one look at the WBO rankings, tells us where this show is headed. Ranked one, two, and three by the organization are flat-liners Soulan Pownceby, Braimah Kamoho, and Denis Simcic.