This Saturday night, undefeated knockout specialist Deontay Wilder (24-0, 24KOs), returns to action after a brief absence from the ring to take on the nearly 40-year-old Damon Mccreary (14-0, 10KOs) at The Hangar in Costa Mesa, California. 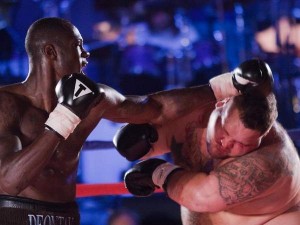 This won’t be the first time that the 26-year-old Olympian will accept the challenge of a relatively unknown fighter. In fact, there are credible boxing scribes who feel that Wilder has been showcasing his talents against bums and phonies, and in truth their assertions aren’t too far off from reality.

Deontay Wilder’s team would probably call their recent opponent selections ‘stay busy fights’ but until we see the “Bronze Bomber” in with some legitimate heavyweights, any and all labels are fair game.

This isn’t to diminish the accomplishments of the unbeaten “Bulldog” Mccreary, but seeing how he’s had only three professional fights in the past ten years, the level of competition that Wilder is tapping into just isn’t up to scratch.

The last time Mccreary looked sharp in the ring was way back in 2001 when he was close to his athletic prime and sporting a decent right hook/right uppercut package…He was also a super middleweight at the time.

Things have changed a lot since 2001. Back then, the Twin Towers were still standing and the super middleweight version of Roy Jones Jr. still walked to the ring brandishing seven title belts. One wonders how high the Bulldog’s ceiling was then with RJJ in full force dominating the boxing landscape, but perhaps that’s why he took a 66+ month hiatus from the sport in July of that year.

Perhaps Deontay Wilder is America’s answer to the Klitchko brothers. Not necessarily that he is the man who will bring the titles back to the states but rather maybe he’ll become our very own 6’7″ monster who regularly dines on 5’11” no-hopers.

At the very least, Deontay Wilder fights way more often than do the current heavyweight world champions, or any of the current heavyweights for that matter. Perhaps he’ll step up his game in a more impressive way than the Ukrainian giants and wow world-wide audiences with the legitimate talents that he brings to the ring.

Deontay Wilder’s speed, concussive power and combination punching are most certainly far from phoney and some think when he gets the opportunity to prove himself on a major stage he will have all the tools necessary to be among the very best in the division.