Here’s a little secret about us Americans– We are not gracious losers, especially when it comes to something we’re supposed to own.

Americans are supposed to rule the heavyweight division; It’s our division, home of Ali, Marciano, Dempsey, Louis and Frazier.

So, with an absence of dominant US heavyweights and with little hope for the future, the fans have just taken to ignoring and/or marginalizing Wladimir and Vitali Klitschko, the current owners of every heavyweight belt worth having. “Let’s just close our eyes and make believe they don’t exist…we’ll open them in a couple of years and hope for the best.” 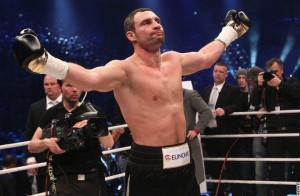 Yes, it’s frustrating to see fighter after fight fall at the heavy hands of the Klitschkos, but the recent American attitude of “If you can’t beat ‘em, marginalize ‘em” is pretty damn pathetic.

It’s not Wlad’s and Vitali’s fault that Tony Thompson and Kevin Johnson couldn’t pull the trigger, it’s not their fault that Sam Peter and Ruslan Chagaev were shut out and it sure as hell isn’t their fault that Chris Arreola keeps losing the directions to his gym.

I’m not a big fan of the Klitschkos and I’ll be overjoyed if someone, someday finds a way to bring home the world title, but I think it’s just plain petty that the American public, en masse, has decided to proudly snub the legit world champions. Wladimir and Vitali Klitschko have taken on all comers and have conducted themselves with class and dignity. And, no, sorry… no matter what message board experts like to proclaim, they are not overwhelmingly boring.

America, get over yourself. If you can’t build the perfect heavyweight, at least recognize the best of the best right now.

Now, as for the question at hand– Just how good are the Klitschko Brothers?

No matter how much respect I have for them as world champs, you have to recognize that Wlad and Vitali are infinitely vulnerable fighters protected by overwhelming physical advantages. Using something as simple as an extended straight left arm as one of their primary tools, both have been able to skate by a rather weak class of heavyweight challengers.

While Wlad fights cautiously self-contained and Vitali is more fluid in his style, both make good use of the outstretched arm, sometimes disguised as a jab, but really used as a tool to create distance and screw with an opponent’s rhythm. With their opponent kept at a safe distance, Wlad and Vitali are free to engage at will, fighting at the optimal distance for their large frame and secure in the fact that, for the most part, the opponent will be neutralized.

Arm trick notwithstanding, the Klitschkos are huge, strong and legitimately heavy-handed. In any era and under any circumstances, their physicality would be enough to get them past most top heavyweights.

I’m not a fan of the fantasy league style of matchmaking where fighters from different eras are matched against one another. There are just too many intangibles, too many differences from generation to generation to make one on one comparisons of fighters from different eras. Having said that, though, it’s hard to imagine some of the all-time greats being neutralized by something as basic as an outstretched arm, even if it’s coming from a 6 ft. 7 physical anomaly.

Most of the old timers would’ve batted that arm down and/or worked their way around it. Then, the fight would be taken inside and the “who wins” discussion would suddenly get real interesting. I’m not sold on either Klitschko’s ability to fight up close against someone with real power or real, old school technique. Being big and strong will take you far, but there are enough  weaknesses in their game that boxing purists can’t help but question how they’d do against a big man who could really box. The Klitschkos, just being Klitschko, would’ve been a tough puzzle to solve, especially in the eras where heavyweights rarely broke 200 lbs., but it’s a tough sell to say that what worked against Rahman, Peter, and Chagaev would work equally well against Ali, Frazier, and Foreman. No disrespect to Wlad and Vitali, but I just don’t see it.

Maybe the more appropriate comparison should be made with the heavyweight class of the 90’s, which saw the end of the Tyson Era and the emergence of guys like Lennox Lewis, Riddick Bowe, Evander Holyfield, and Michael Moorer. But, even in this era, I just don’t see the Klitschkos as being anything other than players in the court, near the very top, but never quite attaining top dog status.

The Klitschkos are, in part, products of a weak heavyweight generation, but that alone is not the reason for their success. They’ve adopted their game to dominate, just as every other top fighter should be expected to do. A lackluster available talent pool is part of the reason for the Klitschkos’ dominance, but there’s a component of that in any of today’s fighters. Would Pacquiao and Mayweather be Pacquiao and Mayweather if they had to contend with Sugar Ray Leonard, Roberto Duran, and Tommy Hearns?

I don’t think the Klitschkos can be mentioned alongside the Ali’s and Louis’ of the world, but that hardly makes them bums. The Klitschko Brothers would’ve been forces to contend with in any era, but as far as real, all-time greatness, grade this one as incomplete, albeit through no fault of their own.