Olimpiyskiy, Moscow, Russia – WBC heavyweight champion Vitali Klitschko (45-2, 41 KOs) stopped an outclassed Manuel Charr (21-1, 11 KOs) on cuts, when a bad cut over the right eyelid forced the stoppage of the fight in the fourth round. 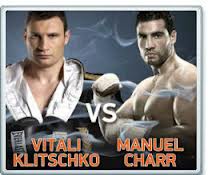 This fight was a departure from the lead-up to the fight, in which many felt Charr had the tools to mimic the game plan of Derrick Chisora and have some success against a Vitali Klitschko in physical decline. Charr came out moving away, hiding behind a high guard as Klitschko stalked and pounded away with jabs and chopping right hands. Klitschko mixed in some right hooks to the body and slapping left hooks around Charr’s guard as he worked his way through and around Charr’s gloves.

Klitschko, whose punches started finding their way though Charr’s high guard, sent Charr to the canvas in the second round. As Charr lunged in to land a left hook he was caught behind the ear with a cuffing right hook from Klitschko and he fell forward onto the canvas. Charr made it to his feet and didn’t look any more worse for the wear as the round ended.

The third and fourth rounds were uneventful, to say the least. Charr was able to land when he threw, but he threw far too little and relied too heavily on the protection of his guard. Klitschko stayed the course, stalking Charr with a variety of left jabs, right hands, and left hooks. A left hand opened a cut over the right eyelid of Charr in the fourth round, and ringside physicians called a halt to the fight when they took a look at the steady flow of blood coming from the cut. A visibly upset Charr angrily protested the stoppage as his corner came in the ring to get him under control.

McCline’s right hand proved to be troublesome for Abdusalamov throughout the fight. It was a hard right hand that sent him down for a short count in the first, and he was caught several more times throughout the short fight. But like any good prospect who is learning on the job, Abdusalamov found the timing to slip McCline’s right hand and land his own short right hook counter that sent McCline down in the second round. McCline would get up at the count of ten, but the referee had seen enough and waved off the fight at the 1:58 mark of the second round.