Despite the many, and I really mean many, reasons not to hold two major cards on the same night Top Rank and Golden Boy are going through with trying to compete and upstage each other Saturday night with their competing Mexican stars.  It appeared Golden Boy would blink when opponent after opponent fell through for Canelo Alvarez, but they simply will not fly the white flag as they proceed this weekend. 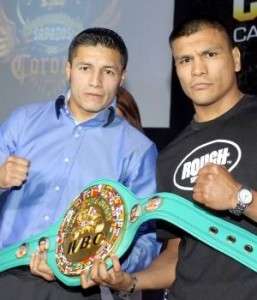 No matter how hard they tried to find an opponent for Alvarez worthy of competing with Top Rank’s Sergio Martinez vs. Julio Cesar Chavez Jr. bout it was not meant to be.  There really is no way to even play devil’s advocate.  Top Rank has the better main event on Saturday.  Even if Alvarez was facing Paul Williams or James Kirkland or Victor Ortiz, the Martinez-Chavez fight is bigger and better in every way.  It is for the historic middleweight crown while the other event is for a 154lb strap.  It pits a small but speedy gifted athlete against a bigger, stronger, but plodding force.  Young vs. old and a hundred other things make it better.

Likely even Golden Boy realizes this.  So they had to do something if they were going to keep their card on September 15.  They did something.  They decided to light some fireworks with two bouts that are all but guaranteed to provide blood and brutal vicious action.  When Jhonny Gonzalez (52-7, 45 KO) takes on Daniel Ponce DeLeon (43-4, 35 KO) and Marcos Maidana (31-3, 28 KO) takes on Jesus Soto-Karass (26-7-3, 17 KO) you are pretty much guaranteed two competitive and action packed bouts for however long they may last.

It’s as if Golden Boy said “they have history, but we have violence.  They have one great fight but we have a full night of action that will have viewers gawking at the brutality.”

Understand this writer is not trying to make Golden Boy’s case that you should watch their show.  I frankly lean towards Martinez-Chavez for all the reasons listed above and many more.  That being said, it is hard to overlook the slick move of stacking the card with those two fights.

In Jhonny Gonzalez vs. Daniel Ponce De Leon you have a boxer with serious power in Gonzalez and a fighter in De Leon who makes up for not having the greatest skill with a ton of will.  Gonzalez is on a tear.  He has stopped eleven of his last twelve opponents with ten of those stoppages coming inside four rounds.  He blends his power with excellent craft learned under legendary trainer Nacho Beristain.  Now, don’t let the “craft” part fool you.  Gonzalez fights aggressive and seeks knockouts.  He owns the WBC featherweight strap, but seems to be the forgotten man in this division likely due to carrying way to much risk for little reward.

De Leon will never be accused of being a pure boxer, but has improved his skills in recent years.  He likes to apply pressure, stalking his opponents which should make for good action against the calm and collected Gonzalez.  While Gonzalez is the favorite with better skill, DeLeon has an X factor that makes the bout interesting.  Despite a first round knockout loss to Juan Manuel Lopez several years back, De Leon has a pretty solid set of whiskers.  Gonzalez has not been stopped in some time but having three KO losses on his record will always haunt Jhonny and remind him that he does not have the classic Mexican beard.  De Leon has the power to put the lights out so even if he is being out boxed he has the ability to turn the fight on the drop of a dime.

Gonzalez and De Leon should produce action.  Marcos Maidana and Jesus Soto-Karass will produce pure violence and aggression.  Neither fighter has any idea how to take a step backwards.  Neither fighter would bother doing so even if they knew how.  Both of these men pride themselves on being willing and able to take your best shot to land one of their own.  The fact that both have excellent chins means no matter how much leather they put on each other it will not end before fans get a lot of action and a lot blood.

The guess here is that the extremely heavy-handed Maidana will eventually be the one to outlast his foe and score a stoppage.  Like the other fight discussed, it certainly can go the other way as Soto-Karass is the naturally bigger man and has underrated boxing skills that are superior to his plodding heavy handed opponent.

It probably would have been smart for Golden Boy to simply move their main event to a different date once they realized they could not have the better bout.  They chose option B and under the circumstances pulled a rabbit out of the hat that they badly needed to have any chance of competing with Top Rank’s PPV.  Whether the move pays off with TV and live viewers remains to be seen.