The Mexican Standoff, made famous by Quentin Tarantino in the movie, Reservoir Dogs, is used to describe a situation where three or more parties engage in a face to face showdown in which no one can emerge as a clear winner and mutually assured destruction is the most likely outcome.

What an appropriate term to describe the mess of politics and egos set to hit the Vegas Strip on September 15th. 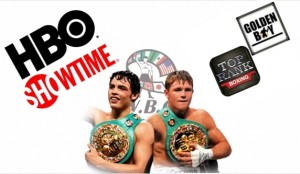 On that evening, at the Thomas & Mack Center, Top Rank Promotions, in association with HBO Pay Per View, will broadcast a card headlined by the long-awaited WBC world middleweight title bout between defending titlist, Julio Cesar Chavez Jr. and Sergio Martinez. Meanwhile, within walking distance, at the MGM Grand, Saul “Canelo” Alvarez defends his WBC junior middleweight title against Josesito Lopez in the main event of a Golden Boy promoted quadruple-header on Showtime Championship Boxing.

Two big cards, seeking the same Mexican and Mexican-American demo group, in the same city, at the same time. There very well could be a memorable night of boxing in store for fight fans, but not everybody who wants to see both cards live will be able to do so. In an era where exposure is increasingly important to the overall health of boxing, a niche sport aimed at a niche market is being split in two. Shared headlines, divided viewership, diminished impact. Both cards are deserving of their own spotlight, but neither will truly be allowed to shine.

Yahoo Sports’ Kevin Iole is reporting that Chavez-Martinez is a sell-out and that Alvarez-Lopez is well on its way to becoming one as well. Still, the head to head competition is troubling to those who would like to draw in the casual fan and pique the interest of new observers.

For those looking to blame someone for this unnecessary conflict, fingers could easily be pointed at Golden Boy.

The promotional outfit, headed by Richard Schaefer and Oscar de la Hoya, took a calculated risk by applying for a permit on Mexican Independence Day, September 15th, in Las Vegas. Top Rank had already booked that date with the intention of scheduling the Chavez Jr-Martinez bout. But Golden Boy, sharing the feelings of many knowledgeable boxing people, assumed that Top Rank founder and CEO, Bob Arum, would never go ahead with a Chavez Jr.-Martinez bout.

But as time passed and Chavez-Martinez held together, Golden Boy found itself in a tough spot. This was originally supposed to have been Alvarez’s coming out party– a pay-per-view headlining debut against the best opponent of his career. First, Paul Williams was chosen, but fell out after the tragic motorcycle accident that left him paralyzed from the waist down. James Kirkland was pegged to fill in for Williams, but ultimately walked over money issues. Then, Victor Ortiz was chosen as the third replacement, but that too fell apart when Josesito Lopez busted Ortiz’s jaw and came away with the win in an Upset of the Year candidate in June. Finally, after some looking around, Lopez was picked to fill in for the fighter he bashed. It was an unpopular decision in most circles, mostly because the Riverside, California native has been a career-long junior welterweight. The selection of Josesito Lopez also signaled the end of any pay-per-view talk. The card, stacked with three quality undercard bouts, would be aired on Showtime and offer a premium cable alternative to the pay boxing taking place about two miles away.

The head to head September 15th showdown also represents a legitimate counter-punch from Showtime to the long dominant HBO, which is looking to Julio Cesar Chavez Jr. as one of their PPV back-ups in a world without Mayweather and Pacquiao.

Under former Showtime head, Ken Hershman, HBO is looking to reaffirm its position as industry leader as well as beef up the product, overall, after a poor run from former HBO Sports President, Ross Greenburg. However, new Showtime Sports executive vice president and general manager, Stephen Espinoza, looks to be an aggressive competitor. Whereas Showtime, in the past, seemed to accept its spot as #2, and program its boxing schedule accordingly, Espinoza has shown signs of actually going after the jugular. Bolstered by his longtime relationship with Golden Boy as their lead attorney, Espinoza walked into his new job with one of the sport’s deepest rosters pretty much at his disposal. The unprecedented move of counter-programming a major HBO pay-per-view is tantamount to a declaration of war.

And, while the corporate types jockey for position, the biggest face to face rivalry may be between the two 20-something Mexican stars, themselves.

Mexico is divided in their support of the two pretenders to the Gran Campeon Mexicano throne. Saul Alvarez, seen as a quiet and humble “good” kid, is king in the heartland of Mexico while Julio Cesar Chavez Jr., always a draw because of his last name, is gaining popularity in the North of the country and in the larger cities.

When either fights, though, Mexico watches. Not in HBO or Showtime numbers, but in near-Super Bowl numbers, sometimes with nearly a third of all Mexican television viewers tuning in. Boxing is a big deal in Mexico and the designation of top dog status in the Aztec Nation is something both Alvarez and Chavez (and their respective management teams) desperately want.

The head to head programming on Mexico’s Independence Day has been widely panned in the Mexican media as something that will actually bring less viewers than normal to both fighters. In a nation where very few people have DVR technology, fans will be forced to choose between Televisa’s Canelo-Lopez card or TV Azteca’s Chavez Jr.-Martinez show. It’ll be the first head to head competition between the two, a test of both fighters’ star power, but one which could divide the viewing public and bring in lower numbers for both stars than would normally be the case.

In the United States, where fewer and fewer people watch actual live TV, most who want to see both cards will do so., either through a DVR set-up or on the internet. There’s little apparent impact of this boxing counter-programming, but is this the best move to make for attracting new fans to the sport?

In the short term, the Top Rank-Golden Boy Vegas showdown on September 15th might actually be a good thing. Hotels will fill up, Fans will pack themselves into both arenas, and even TV numbers should be respectable, despite the head to head competition. But one still can’t help feeling that, in an age where boxing is looking to expose their product to as many people as possible, two legitimately good cards deserve their own spotlights and the promotional firms, which hold all of the pieces in today’s boxing puzzle, should be less focused on running each other out of business and more aggressive about promoting the overall health of the sport.