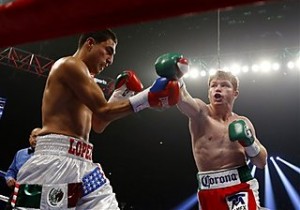 The size differential was apparent, despite Lopez coming into the ring one pound heavier than Alvarez. Canelo went to Lopez’s body early on, and it proved to be Lopez’s Achilles heel in the fight. Lopez, who was game and did his best to keep himself in the fight, went down three times from left hooks to the liver. The first knockdown came after a hard overhand right, when Alvarez unloaded a left hook that shook Lopez’s soft midsection and sent him crashing down on his backside. Lopez beat the count, but was bleeding from his mouth and nose.

Lopez came out for the third round weary of Alvarez’s left hook liver shot, carrying his right arm tight to his body. It was all for naught, as another left to the liver sent Lopez down for a count. He beat the count again, and had some bright moments in another dark round, when he landed several hard straight right hands and left hooks when Alvarez backed off.

The third knockdown came in the fourth round from another liver shot after an accidental low blow momentarily stopped the action. Lopez came back to get himself back into the fight with several hard shots, but Alvarez walked through every one.

The end came in the fifth round after Lopez had his best moment of the fight, ripping Alvarez with  several hard right hands and left hooks. Lopez found himself trapped in a corner and he took a powerful right hand-left hook-right hand combo before referee Joe Cortez stepped in and stopped the fight.

In his post-fight interview Alvarez was predictably congratulatory of Lopez, who took the fight against extremely tall, and heavy odds. He also stated he was ready for the winner of the Cotto-Trout fight, as well as Floyd Mayweather Jr.

The bout between WBC feather weight champion Jhonny Gonzalez (52-8, 45 KOs) and Daniel Ponce De Leon (44-4, 35 KOs) was the first bout of the night not eligible for the $100,000 knockout bonus, when an accidental clash of heads forced an early look at the ringside judges’ scorecards.

The fight started as a tactical battle, as each man was respectful of the other’s power. They fought from the outside, darting in behind their jabs and throwing straight rights and lefts. An early clash of heads opened a cut on the forehead of Ponce De Leon. The bleeding wasn’t a serious issue, but it forced Ponce De Leon to fight with a greater sense of urgency.

Ponce De Leon’s slightly greater work rate helped him wear Gonzalez down in the middle rounds, as his output increased while Gonzalez’s output dipped. Ponce De Leon scored a pivotal knockdown in the sixth round, started by a looping overhand left hand that rocked Gonzalez, sending him reeling back. A follow up left hook to the body sent a rubber-legged Gonzalez falling down through the ropes.

Gonzalez would make it back to his feet and to his corner at the end of the round, but it was the beginning of the end of his night. Another big accidental clash of heads opened a nasty cut over the right eye of Gonzalez, and upon inspection by the ringside physician, he elected not to continue, citing trouble with his vision.

The fight went to the scorecards, and Jerry Roth scored the fight 77-74 for Ponce De Leon. Judges Richard Houck and David Sutherland turned in scores of 79-72, both for Ponce De Leon, who takes home the WBC featherweight title. The Boxing Tribune’s unofficial scorecard read 77-74 in favor of Ponce De Leon at the time of the early decision.

Marcos Maidana (32-3, 29 KOs) stopped Jesus Soto Karass (26-7-3, 17 KOs) in eight brutal rounds. Maidana opened up showing fast improvement under new trainer Robert Garcia. He threw more jabs in the first 2 rounds than we’ve grown accustomed to seeing over an entire fight. Soto Karass switched back and forth between the orthodox and southpaw stances in an effort to confuse Maidana.

Maidana controlled the fight through the first three rounds, doubling and tripling his jab and throwing an uncharacteristically straight right hand behind it. On occasion he doubled his left hook, and even threw his straight right hand in succession.

Both men threw punches after the bell to end the third round, which led to a changing of the momentum over to Soto Karass’ corner. Soto Karass came out invigorated in the fourth round, frustrating Maidana. Both men were docked a point for hitting on the break, and Soto Karass got the better of the heated exchanges when the action resumed.

Soto Karass controlled the next three rounds with a southpaw switch-up and some serious body work that had Maidana holding on. Maidana lost another point for hitting on the break in the seventh round, but he came back to finish the round with a hard straight right hand that caught Soto Karass backing straight up with his chin exposed, sending him falling to the canvas.

Soto Karass made it to his feet and safely out of the round, but only lasted 43 seconds into the eighth round. A double right hand sent Soto Karass reeling back into the ropes, where another right hand and wild flurry prompted referee Kenny Bayless to step in and stop the fight, quite possibly a bit premature.

IBF bantamweight champion Leo Santa Cruz improved to 21-0-1 with 12 knockouts with a fifth-round stoppage of former world titlist Eric Morel (46-4, 23 KOs) in the opening bout of the Showtime broadcast.

Morel, now 36, opted to stand in the pocket and trade with the much younger Santa Cruz. Morel landed his share of punches in the first round, but Santa Cruz was sharper in landing the more flush, powerful shots. Santa Cruz’s left hook and overhand right were a sure thing in the first round, and he did a good job of covering up after throwing.

Santa Cruz started going to Morel’s body in the second round, forcing Morel to back out and try to box more. Santa Cruz was able to find Morel as he settled in to throw, and kept ripping Morel with left hooks to the rib cage.

The considerable volume of body punches opened up Morel’s head for punishment, and Santa Cruz went back to landing his left hook and overhand right behind a thudding left hook to the body. After five full rounds Morel’s corner decided their fighter had taken enough punishment and called an end to the fight.