While rumors have swirled for weeks and even months about Pacquiao’s next fight, it was finally made official Friday with the announcement that Pacquiao will meet his greatest ring rival Juan Manuel Marquez for a fourth time.  They will battle at the MGM Grand in Las Vegas on HBO PPV. 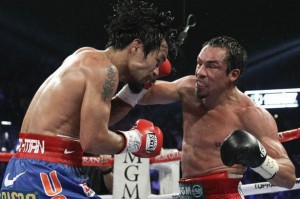 While everyone in the boxing world desires a bout between Pacquiao and Floyd Mayweather, it was certainly not going to happen this year with Mayweather recently being released from his prison sentence. So if Pacquiao was going to fight again this year he had to find a different dance partner.  The first rumors centered around Tim Bradley after he gave the Filipino icon his first loss in more than seven years, ending Pacquiao’s fifteen bout winning streak.  Bradley won with a highly controversial decision in a fight Pacquiao seemed to dominate.

After that, an immediate rematch seemed natural but never came about.  One problem certainly involved the fact that the first fight was clear and the only purpose for a rematch was to right the wrong of poor judging.  In addition, Bradley is far from a recognized name to the casual boxing fan and it showed as the Pacquiao-Bradley bout produced fewer than one million PPV buys.  Pacquiao, in recent years, has steadily done well over that mark including getting 1.3 million in the third bout with Marquez who brings a large Mexican audience to the TV and arena.

Various other rumors had Miguel Cotto in the mix for a rematch but that was quashed when the Puerto Rican star announced he would take on Austin Trout on December 1 at Madison Square Garden.  This left Pacquiao with few options in a welterweight division deep on young talent but thin in terms of marketable PPV stars.

So, once again, Manny Pacquiao (54-4-2, 38 KO) and Juan Manuel Marquez (54-6-1, 39 KO) will try to put a definitive mark on their ongoing saga in the ring.  They have fought three times before and each bout was highly competitive with a highly controversial result.  Other than Leonard-Hagler few bouts are more widely debated as to who won.  Pacquiao is 2-0-1 over Marquez but many will argue Marquez won all three.

Pacquiao opened this feud with a fury in the first fight back in 2004 at featherweight when he floored Marquez three times in the opening round.  The proud Mexican would not go away and fought back to a draw.  In the rematch in 2008 at Jr. lightweight Marquez went down once and it proved to be the deciding factor as Pacquiao won a split decision by one point on the deciding card.  Marquez may have made his best case for a win in the third bout that took place in November of last year at welterweight in another close fight, but Pacquiao would get the benefit of the judges winning a majority decision.

The first two fights were absolute barn-burners with thrilling action.  Fight number three was competitive and exciting, but at the older age and higher weight was not as aggressive.  At the higher weight Pacquiao was expected to blow Marquez out but the adage styles make fights proved to be bigger than size as Marquez’s counter punching style once again was the thorn in Pacquiao’s side.   Marquez clearly believed had won the third fight and walked out of the ring dejected without giving an interview when the decision was announced.  When he spoke in the dressing room afterwards he even hinted at not wanting to fight anymore because of what he considered poor judging and not being able to get a fair shake against Pacquiao.  Obviously time has dulled those feelings as Marquez would like another crack and the payday that comes with a Pacquiao fight.

Now they will meet for a fourth time, hoping to finally once and for all establish who should come out ahead in their ongoing back and forth war.  Pacquiao likely wants to finally put an exclamation point on a win over Marquez by stopping him.  Marquez will again try to counter punch and attack his way to the elusive win over the Filipino he has sought for the last nine years of his career.