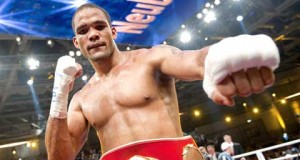 After four relatively even rounds, the challenger, Ross, turned up the heat and dropped the defending champ in an entertaining back-and-forth fifth. Hernandez, the Cuban who now resides in Germany, regained control of the bout over the next couple of rounds, boxing well from the outside and taking advantage of his edge in height and reach.

By the ninth, however, Ross was back to pushing forward and scoring with some big shots that bothered the defending champ. But the challenger never found the right shot to hurt Hernandez again and, by the championship rounds, both fighters were too arm weary to really cause much damage.

The Boxing Tribune scored the bout 114-113 for Ross and, from hearing more than a smattering of boos from ringside, even many of the German fans disagreed with final decision in favor of their own adopted hometown fighter.