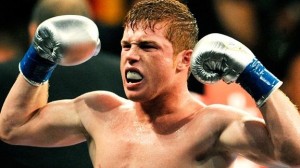 According to Ratings Mexico, Alvarez, who faced Josesito Lopez in defense of his WBC junior middleweight title, had a little over 18.1 million viewers tuned in, translating to a 15.1 rating with a 36.6 share for Televisa

Meanwhile, Chavez Jr., defending his WBC middleweight belt against Sergio Martinez, had about 16.2 million Mexicans watching his fight, registering a 13.5 rating and 34.2 share for TV Azteca.

All together, the numbers mean that about 34.3 million Mexicans watched boxing on the evening of September 15th with an astounding 70.8% of all television viewers in Mexico during that time slot tuned into one of the two bouts. To make the numbers even more amazing, both fights took place during traditional Mexican Independence Day festivities, at a time when large outdoor celebrations are commonplace all over the nation.

The highest rated fight of all time in Mexico remains Juan Manuel Marquez-Manny Pacquiao III, which drew 37.2 million viewers and generated a 31 rating.