The consensus numbers one and two in the world have changed position quite a bit over the last couple of years, but 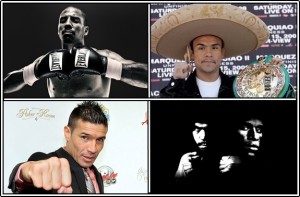 most still agree that Floyd Mayweather and Manny Pacquiao are, pound for pound, the two best fighters in the world.

But if Floyd and Manny are numbers one and two, who’s number three?

Recently, Andre Ward and Sergio Martinez have both made a case for themselves to be placed in the number three slot. At the same time, old pro Juan Manuel Marquez also deserves some consideration.

Here’s a look at all three fighters and their qualifications for Top 3 placement:

Just recently outclassed Julio Cesar Chavez Jr. to re-take his rightful place as WBC middleweight champ. Martinez is a late bloomer and a fighter who, really, has only been considered a world class fighter since 2008.

The Olympic gold medalist became the top dog at 168 after winning the World Boxing Classic. Since then, Ward has defended his two belts against light heavyweight titlist, Chad Dawson.

Marquez’s long, distinguished career may be best defined by his three close fights with Manny Pacquiao. Many feel that the Mexican counter-puncher deserved at least two of the three close contests against the Filipino star. A fourth clash between the arch-rivals is set to take place on December 8.

Pound for Pound lists are all very subjective and, really, just for fun. So, what say you? Ward, Martinez, or Marquez? Maybe someone else?