Twisted muppet and WBC President for Life, Jose Sulaiman, is outraged that news of Julio Cesar Chavez Jr.’s positive test result for Marijuana was made public before he got his hands on the report. 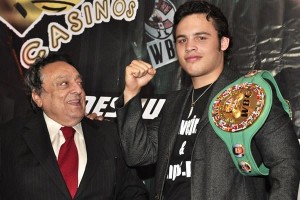 “I am outraged that someone leaked the test results to the public before my organization and I could somehow smother the story and bury the lab documents in our titanium vault below WBC headquarters.”

OK, Sulaiman didn’t say that, but it was kinda the same:

“…whoever released that note has committed a serious violation of confidentiality,” Sulaiman said. “According to anti doping regulations, only the boxer, the Boxing Commission and the World Boxing Council, can be notified about the positive results, in order to give the boxer to have the chance to appoint a representative to be present at the opening of the second test, which has to be made in a special laboratory appointed by the WADA.”

Godfather Sulaiman went on to take mock offense at Bob Arum’s lighthearted confirmation of Chavez’s positive test result and statement that “there’s no promoter or boxers who could pass the marijuana test.”

“..it is an irresponsible statement,” Sulaiman fumed. “I do not accept that all boxers and boxing people have consumed drugs…In the 50 years of history of the WBC there have been 13 cases in all its fights and only 2 have been in championship bouts…Boxing is clean of drugs.”

Of course, this is the same man who allows Chavez Jr.employee, Dr. Antonio Salazar, to be Chavez’s certifying physician despite his role as the doctor who “accidentally” gave the fighter the banned substance, Furosemide, in 2009.

Needless to say, Sulaiman’s heart is tied to his wallet and, in Chavez Jr., he has the perfect money-making machine– a money-drawing dupe who needs the WBC’s interference and will gladly pay the 3% sanctioning fee for the privilege of a professional enabler.

Chavez Jr. faces up to a year’s suspension by the Nevada State Athletic Commission and/or a fine that could range anywhere from $10,000 to his full $3 million purse.