Technically, Alexander Povetkin (24-0, 16 KOs) has a world title and, technically, he’ll be defending that title against Hasim Rahman (50-7-2, 41 KOs) this Saturday in Germany. But Povetkin-Rahman is really more of a quick trip to the go-nowhere blankness of heavyweight purgatory than a title fight– Two fighters with nowhere to go, for very different reasons, fighting to stay relevant while waiting for some poorly-defined “bigger thing” to come along.

The “regular” WBA heavyweight world title in Povetkin’s possession is more like an admission that he’s not in the league of the organization’s real titlist, “super champ,” Wladimir Klitschko. The Venezuela-based sanctioning body has become a haven for fistic welfare, issuing fake belts to those not quite good enough to become the organization’s real champ or not quite connected enough to force the legitimate champ into a title bout. 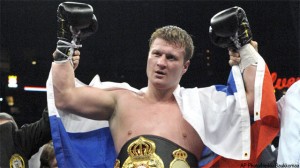 In their world, Karoly Balzsay and Andre Ward share a little brother/big brother super middleweight champ relationship and Austin Trout carries a world junior middleweight title belt when everyone saw Floyd Mayweather win the real world title against Miguel Cotto last May. At one point last year, the money-hungry organization even had three world featherweight champs all competing and all handing in their 3% sanctioning fees  with each defense.

Lost in this paper champ mill are some pretty good fighters like Gennady Golovkin, Celestino, Caballero, and Alexander Povetkin.

Povetkin, the 2004 Russian Olympic gold medalist at super heavyweight, is ranked in the heavyweight top five by most and as high as number three on many listings. His resume is pretty solid, too, with wins over Chris Byrd, Eddie Chambers, and Ruslan Chagaev topping a decent enough opponent list– Nothing legacy-defining, just a lot of solid names that paint an overall picture of competence.

Despite his obvious ability, Povetkin’s biggest selling point in this heavyweight marketplace is that he has yet to be beaten by a Klitschko– something that only a small handful of top heavyweights can say these days.

Former trainer, Teddy Atlas, fought long and hard to get him off the Klitschko victim conveyor belt and put him on a healthy road of development and growth. Rather than prop him up for one big payday in a bout he couldn’t hope to win, Atlas was working on turning Povetkin into a sharp, well-seasoned fighter who would actually have a shot at scoring the major upset.

“Give me a couple of more fights before you mention them [the Klitschkos] again,” Atlas said after Povetkin knocked out veteran Cedric Boswell in late 2011, “then we’ll take them on and be a little more complete. And you never know, you might not need to talk about Klitschko no more.”

Time was on Povetkin’s side as the Klitschkos grew older and, in Atlas’ long-term plan, the 31-year-old Russian would be getting better. But time wasn’t on Atlas’ side as the veteran trainer was replaced amid a swirling media storm of stories, reasons, and excuses.

Officially, the story was that Povetkin’s unwillingness to train in the United States necessitated the change in trainers. Unofficially, Atlas and promoter Kalle Sauerland, who Atlas described as a “punk” and characterized as a clueless rich kid, were never on the same page in terms of Povetkin’s career trajectory.

Earlier plans to feed Povetkin to Wladimir Klitschko for an unfavorably structured $2 million purse were foiled by Atlas in favor of the slow build route and, after that, the writing was on the wall that, by hook or by crook, Atlas would soon be on the outs.

Following the Boswell fight, Povetkin brought in new trainer, Alexander Zimin, and looked out of sorts and sloppy in scoring a majority decision victory over cruierweight titlist, Marco Huck in February.

The poor showing prompted another change in trainer for his upcoming title defense, this time bringing in Hall of Fame junior welterweight, Kostya Tszyu. This will be Povetkin’s third trainer in as many fights.

This Saturday, at the Sporthalle in Alsterdorf, Hamburg, Germany, Povetkin defends his belt against veteran former world titlist, Hasim Rahman  in a bout that was originally scheduled to take place in July, but had to be postponed due to a Rahman wrist injury.

Rahman is a world class name, but not very frequently a world class fighter. With the exception of his one big knockout punch against WBC/IBF world champ Lennox Lewis in 2001 and a few other moments here and there, Rahman has just been an average, high second-tier heavyweight– solid but not spectacular. Since 2006, however, even those few world class moments have been absent.

For the last six years, “The Rock” has lived on the fringes of title contention, paying bills with journeyman conquests and a crushing TKO 7 loss to Wladimir Klitschko in 2008 (in a world title bout where Rahman replaced Povetkin).

Now, the 40-year-old Baltimore native is grasping at one last straw and one last chance to grab heavyweight gold, albeit a poorly-regarded manufactured version of the title. A win means little more than a guarantee of at least one more major payday. A loss means a return to fighting in conference centers, armories, and low-stakes casinos in Middle America.

Rahman’s plan, whether it be in this fight or in his career, is to look good enough to be relevant and hope for the best.

As a Top 5 heavyweight, a win over a guy like Rahman should be a sure thing, but given Povetkin’s recent form, more than a few people are giving the American a fair chance to score an upset. Assuming he beats Rahman, though, what’s next for Alexander Povetkin?

The only options seem to be a big money sacrifice to one of the Klitschkos or a string of weak title defenses against second and third-tier opposition.

Caught between boxing politics and in-ring truths, Povetkin is in a tight spot and, unless he shows himself capable of elevating his game with stellar performances, looks to be stuck in a boxer’s purgatory. A name without drawing power, a champ without a real title, and a good fighter without the ability to really prove it.