Hometown favorites McJoe Arroyo and his brother McWilliams did their share to please the fans earlier tonight as both scored TKO wins in San Juan, Puerto Rico on a card promoted by PR Best Boxing Promotions. 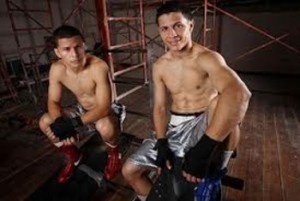 McJoe Arroyo (10-0, 5 KOs) took a step up in competition by meeting former WBO titlist Jose Lopez (39-10-2, 32 KOs)  of Trijillo Alto, PR.  Arroyo dropped Lopez twice in the bout, with the referee waving off the action in the fourth round giving Arroyo the TKO win.  Lopez stated after the fight that he was retiring.

McWilliams Arroyo (13-1, 11 KOs) successfully defended his WBO Latino flyweight title by stopping Colombian Ronald Ramos (32-10-3, 17 KOs) in the fifth round. Arroyo had little (or no) trouble in this bout for as long as it lasted, a jarring left hook was Arroyo’s parting shot, earning him his 10th straight win.

In women’s action, undefeated WBO and WBA light flyweight champion Yesica Bopp (22-0, 10 KOs) of Argentina remained unbeaten, scoring a seventh round stoppage of Amercian challenger Marisol Miranda (5-5, 1KO). Bopp showed impressive boxing skills, cutting Miranda over her left eye, which would eventually cause the stoppage. This was the eighth defense of Bopps WBO title, her WBA title was not at stake.