Exactly two years ago, Wilfredo Vazquez Jr. was a well-regarded, hotshot 26-year old prospect who had just captured his first world title and Ivan Calderon was a 35-year-old veteran cruising into the final stages of a Hall of Fame career.

Two years can be an eternity in boxing. 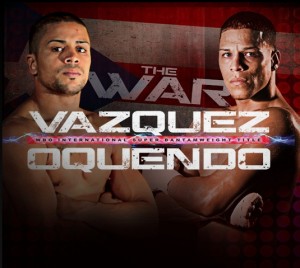 Since then, the two Puerto Rican stars are a combined 2-4 and have fallen from boxing’s main stage with the dreaded words, “damaged goods,” attached to them by many.

Vazquez Jr., a second-generation fighter, would lose his WBO junior featherweight title in a shocking TKO 12 upset to Jorge Arce in November of last year and then, after a stay-busy win, was beaten decisively in a bid for the newly-vacant WBO belt by Nonito Donaire in February of this year.

Meanwhile, the previously untouchable Calderon would not only suffer the first and second losses of his career in back-to-back fashion, but he also lost his WBO junior flyweight belt and was literally beaten into submission on both occasions by Mexico’s Giovani Segura. “Iron Boy” would make a return to the ring in October of last year, going back to his previous strawweight divisional home and scoring a dull, unconvincing split decision win over 9-9-1 journeyman, Felipe Rivas.

Now, the two fallen stars are co-headliners on a card with great importance for both of their careers. And they are, by no means, facing soft touches.

Vazquez Jr. (21-2-1, 18 KOs) will be going up against well-regarded 29-year-old challenger and fellow Puerto Rican, Jonathan Oquendo (22-2, 15 KOs) in a twelve-rounder for the vacant WBO International super bantamweight title.

Oquendo, a native of Bayamon, has been inactive for a year due to an ATV accident that claimed the life of his girlfriend and left him with minor injuries. Prior to the tragedy, Oquendo seemed to be hitting his stride as a pro and inching towards world class status.

Originally scheduled to be on the undercard, Oquendo jumped at the chance to face Vazquez Jr. after Mexico’s Rafael Marquez pulled out of the main event. Clearly put, a win puts him back on track and will likely mean a world title shot in 2013.

In the co-headlining bout, defending WBO 105 lb. titlist, Moises Fuentes (15-1, 7 KOs), plays second fiddle to the popular Calderon (35-2-1, 6 KOs) while looking to make the second defense of his belt.

Mexico City’s Fuentes captured the WBO title with an unlikely split decision upset of Raul Garcia in August of last year. Prior to the title-winning effort, Fuentes was considered purely a club-level fighter with opposition that, combined, had only managed a meager 56-50-4 record.

Since winning the title, Fuentes has defended it once, scoring a TKO 1 victory over unknown and overmatched Julio Cesar Felix.

For Fuentes, this Calderon bout will be the highest-profile contest of his career and a real point of pride, even if the win comes at the expense of a badly-faded future hall of famer.

On Saturday at the Coliseo Ruben Rodriguez in Bayamon, Puerto Rico, four fighters with redemption on their minds will be featured in co-headlining bouts. All four should be fighting with chips on their shoulders, pushing for that big win that will either put them back at the top or firmly place them back on the road to glory.

Don’t let the small size of the fighters or the low-volume hype of this minor PPV card fool you– The stakes are truly big.