Coliseo Ruben Rodriguez, Bayamon, Puerto Rico— In a back and forth seven round battle of junior featherweight contenders, Wilfredo Vazquez Jr. (22-2-1, 19 KOs) overcame a sharp and motivated Jonathan Oquendo (22-3, 15 KOs) to take a well-earned seventh round TKO victory in the main event of an independent 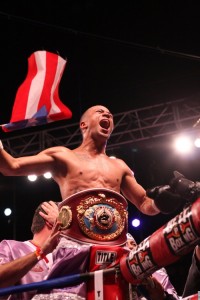 Oquendo, in his first bout since the tragic ATV accident that claimed the life of his girlfriend, came out bullish and immediately took the fight to the former world titlist. For most of the first three rounds, and at various other points of the contest, it looked as though he would overpower Vazquez and put an early end to the contest.

But Vazquez was hanging in tough, withstanding Oquendo’s crude, but powerful offensive surges and eventually finding his own opportunities to counter.

Vazquez’s hand speed made up for his lack of raw power and whenever he got a chance, he answered back with sharp counter-punches that stopped Oquendo in his tracks and created opportunities for the second generation star to turn the tide.

At the end of the seventh, Oquendo was stunned by a counter right hand that eventually led to him taking a knee.  Then, to everyone’s surprise, Oquendo took the full ten count, accepting the TKO 7 loss.

In the co-headlining bout, Defending WBO strawweight champion, Moises Fuentes (16-1, 8 KOs) put the final nail in the coffin of Ivan Calderon’s career with a three knockdown, TKO 5 victory over the former strawweight and junior flyweight champ.

Calderon (35-3-1, 6 KOs) looked solid enough in the first two rounds and actually took the third round on The Boxing Tribune’s scorecard with some intelligent movement and sharp counter-punching.

In the fourth, however, Calderon suddenly ran out of gas and found himself taking a beating in the corner at the end of the round.

Calderon came out flat-footed and gassed for the fifth and the 27-year-old Mexican pounced on the wounded Boricua legend, dropping him three times with body shots before the referee waved off the contest at the 1:22 mark of the fifth round.

The 37-year-old Calderon now, likely, faces the end of his eleven-year Hall of Fame career, posting an impressive 18-3-1 record in world title bouts.

On the undercard, Puerto Rico’s WBO Latino lightweight champ, Jose Gonzalez (21-0, 16 KOs) dropped Colombia’s Oscar Cuero (15-9, 12 KOs) 58 seconds into the first round with a body shot. Cuero would beat the count, but get sent back to the canvas about forty seconds later with another body shot. He would again beat the count, but was clutching his mid-section and clearly unable to continue. The bout was officially waved off at 1:54 of the first round.