Looking bloated and slightly disheveled with a troubling hand-to-brow nervous tick, Julio Cesar Chavez Jr. appeared on the Spanish language Nación ESPN show to clear the air about testing positive for marijuana and the reasons surrounding his unanimous decision loss to Sergio Martinez on September 15th. 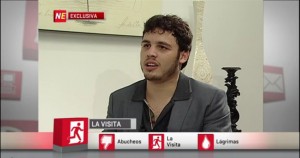 Advertised as a tell-all, coming clean confession, viewers, instead, were treated to a barrage of excuses and justifications packaged in a shell of pure denial.

For anyone who has dealt with addiction, the 26-year-old’s interview was a perfect representation of the rabid, obsessive denial that comes right before the bottom falls out.

This is not to say that Chavez is an addict or suffering through anything greater than “rich kid syndrome,” but it definitely wouldn’t be a surprise if we began hearing some sad tales of an out of control life over the next several months.

In any case, Chavez opened up on ESPN and laid blame on everything and everyone he could. He blamed the positive marijuana test on a cannabis oil treatment for insomnia. He blamed the insomnia on a nervous condition from having to lose so much weight before each fight– According to him, as much as thirty-three pounds for each fight and close to twenty-two pounds in five days prior to his bout with Marco Antonio Rubio. He blamed his slow start in the Martinez fight to a never before revealed nasal condition that only allows him to breathe at 40% capacity. He blamed an out of control corner for not giving him proper advice. But the most noteworthy and, possibly, the most honest moment of the interview came when he spoke about his father.

“I saw everything. I saw how my father drank and took drugs every day,” Chavez answered when questioned about the possibility of him being an addict of some sort. “I always told myself, ‘I can’t be like my father.’ It was hard. It affected me psychologically. People don’t understand what the image of being Julio Cesar Chavez Jr. has done to me. They say that he has protected me and has given me everything. The only benefit I had is in the name, after that, nothing.

“My father hurt me in a lot of ways when he was drinking and using drugs. He would fight with people, he would act for me and speak for me. He made people think that he was in control of me as a person. I respect my father, he’s the best fighter from Mexico and from the world, he’s my idol, but he needs to understand that it’s my life, my career, and whether I win or lose, train or don’t train…they’re my decisions.”

Earlier this week, WBC President Jose Sulaiman, who has had a major Chavez family fixation for about three decades, went public with claims that Jr. was gambling excessively and acting irrationally in recent months.

Given two busts for banned substances, a DUI arrest, and all kinds of rumors of pre-fight shadiness, both boxing-related and in his civilian life, there’s an ugly picture starting to form.

Hopefully this picture is just being painted with the cynical conclusions of a jaded media and is not the personal implosion it appears to be.

Still, it’s hard to feel sorry for a poor little rich kid who grows up to become a self-indulgent man-boy.  And I suspect that most are going to share that sentiment as Chavez Jr. goes down whichever road awaits him.

A Farewell to Fists

Sadly, what had the potential to be the most hotly-contested boxing writer struggle since Dan Rafael vs. A defective Pringles can in ’06 is no more. Gabe Montoya vs. Mark Ortega has been called off.

For those not familiar with the situation, this is what I posted on the Rant two weeks ago, as part of our exclusive mega-fight preview:

According to an anonymous source with knowledge of the situation, personal and professional beefs came to a head at a Las Vegas bar on Mexican Independence Day weekend and resulted in Montoya issuing a mean girl cat slap to Ortega’s face…From there, a four round grudge sparring session of doom was scheduled in a month’s time at Fortune’s Gym in Los Angeles.

Thursday afternoon, however, Ortega’s editor in chief at The Queensberry Rules, Tim Starks, issued a Twitter statement putting the kibosh on the girlie grudge match.

Sorry to be a spoilsport, but I’ve put the kibosh on the Mark Ortega-Gabriel Montoya fight Oct. 13. I’ve made it clear to Mark that it’s not something I want my site associated with, and he has agreed not to participate.

There will be some who will suggest Mark is somehow being a puss, but I can tell you it’s not the case. We tried to find an amicable solution to this, and could not. It took my insistence that Mark not participate in the fight to get him to abandon it. I see this as Mark making a decision to behave like a professional boxing writer rather than a guy who engages in physical violence with other boxing writers. Mark’s recent remarks on Twitter point to him wanting to reduce unnecessary conflict, an approach I support.

And that’s not me pointing the finger at Gabe. I think there’s plenty of blame to go around for how this escalated. I don’t intend to debate with anyone what percentage of the blame goes where. Nor do I intend to say anything else about this matter. I’ve advised Mark to avoid contact with Gabe in the future and defend himself if physically confronted. Everyone should now just go ahead and enjoy the professional boxing matches on Oct. 13, because they’re plenty good without salacious boxing writer scraps.

Max Boxing’s Montoya responded with his characteristic class and professionalism:

Let it be noted that as soon as Lady Starks tweeted, she, along with her concubine disappeared from gchat. And these guys cover #boxing.

I’d make a joke about how Queensbury Rules is an appropriate website name but I’ve known drag queens tougher than Starks and Ortega.

So about the fight I was actually not talking about. Apparently it’s off and this is why: twitlonger.com/show/jhf8km@markeortega is a coward

So, Montoya-Ortega, ironically scheduled to take place smack dab in the middle of National Anti-Bullying Month, is no more.

But we still have our hopes, dreams, and imaginations.

Perhaps, someday, some other sickly-looking kid will run afoul of Mr. Montoya and receive the slapping of a lifetime, followed by four rounds of padded doom at Fortune’s Gym. Maybe some wheelchair tough guy will roll over the line and get “what’s coming to him” as well. After all, honor is honor. Montoya is putting you all on check.

As another literary tough man, Ernest Hemingway, once said:

“If you cross me (and look frail enough), I will find you and slap you…really, really hard. Then, I’ll challenge you to a four round sparring match in a month’s time. If you don’t show, you are SO busted on Twitter. Arrgh.”

Well, those weren’t Hemingway’s exact words. You sorta have to read between the lines, but I know Papa Hemingway would totally approve of the hairy-chested manliness displayed by boxing’s undefeated Twitter Warrior. Bravo to the conquering hero, enjoy the spoils of a well-earned victory by forfeit.

*** Editor’s Note: Any harassing emails to staff are considered “on the record” and subject to publication.***