In the Ridley Scott blockbuster Gladiator, the fated Roman general’s aide Quintus remarks just before the final battle with Germanian tribesmen, “People should know when they are conquered”.

The reply from Russell Crowe is swift and cutting, “Would you? Would I?” 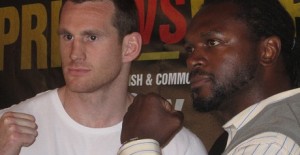 And so it seems for Audley Harrison who continues to defy reason and the calls of British boxing fans and fellow pugilists alike who, save for a minority of masochistic followers, have been imploring the former Olympic champion to call time on his hit and miss (more miss than hit) pro career.

But once more Harrison (28-5 21KOs) is telling himself and anyone else foolish enough to listen that he senses that this is now ‘his time’.

He has remarked this week that he has been living a lie since turning pro and, spurred on by the performance of the British Olympic boxing team, is ready to show us all the REAL Audley.

There is just one small problem with that claim– The other guy that will be in the ring with him come Saturday night defending his British Heavyweight belt with hometown advantage at the Echo Arena, Liverpool.

David Price is a rising star on the British heavyweight scene.

Hot on the heels of his Mancunian rival, Tyson Fury, Price (13-0 11KOs) is a man mountain at 6ft 8 with heavy fists and a sound boxing brain.

Promoted by Frank Maloney, who guided Lennox Lewis to greatness 2 decades previous, Price will surely feel confident knowing that Audley is a man that can be hit and a man that isn’t comfortable when he is being hit.

A win in May against Ali Adams (Adams later testing positive for a banned substance and finds himself banned as a result) just about kept Audley in the game and few will forget his 3 round ‘no show’ against David Haye in 2010 which completed the fall from grace that had started all the way back in 2005 when, after narrowly losing in a Commonwealth title fight against Danny Williams, he then went back to back losses and added two more before the Haye farce.

But trawl through the mire that is Harrison’s career and you find just a nugget of intrigue here.

There are few dead certs in sport (unless fixers have been employed of course) and boxing throws up its own script-flippers from time to time.

Go back to April 2010 and Harrison’s only other moment of genuine glory (after the gold medal in Sydney a decade earlier) came when, in the 12th round of a rematch with Michael Sprott and down on the cards, Harrison unleashed a bomb of a left hook which downed Sprott and saved Harrison from another of his career specialty ‘brinks’ earning him the European title in the process.

Harrison clearly doesn’t know when he is conquered and he may still possess something damaging in those hands of his, assuming he finds what he has always lacked, the fire in his belly to let them go. And of course, the target.

Add to that the fact that the one question mark that is still to be removed from above Price’s head is his ability to take a good shot on the whiskers and there is just enough here to make this worth a look.

It should be an opportunity to watch David Price finally put everyone, Audley included, out of their misery and propel himself toward European competition but if Audley lands one flush….well….then it could get interesting!