In pro wrestling, it’s referred to as a “dark match”. It’s the opening match (or matches) put on prior to a live telecast, aimed at getting the audience warmed up for the moment the show goes live. It’s usually lower level guys, and always done before the show. On Friday, October 12th, Jermain “Bad Intentions” Taylor (30-4-1, 18 KOs) will put on a dark match of his own when he meets Raul “El Toro” Munoz (22-15-1, 16 KOs) at the Ameristar Casino in Saint Charles, Missouri in a scheduled 10 round middleweight contest. Part of the card will be broadcast live on Showtime’s “ShoBox” program, but Taylor’s fight won’t be aired. 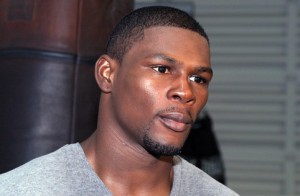 The live telecast will feature the action of undefeated lightweight and 2008 Puerto Rican Olympian Jose Pedraza (10-0, 6 KOs) taking on Alan Benitez (7-1, 1 KO), and Jonathan Cepeda (12-0, 11 KOs) vs. Lamar Russ (10-0, 6 KOs) in a battle of undefeated middleweights. Showtime only plans to air highlights of the Taylor bout.

The Munoz fight is standard “stay busy” activity for Taylor in the latest battle of his war to resurrect his career. It will be Taylor’s third bout since returning to the ring in December of 2011 after a two year layoff due to a brain bleed suffered in a 2009 knockout loss to Arthur Abraham.

For the former middleweight champion, his trip on the downward slope all started in 2007, when he was stopped in the seventh round by Kelly Pavlik and lost both his WBC and WBO world titles in the process. Four and a half months later, Taylor would lose again to Pavlik via 12 round decision.

Looking to get back on the right track, Taylor would challenge, and defeat Jeff Lacy who was also in a rebuilding phase. The success would be short-lived however, as Taylor would go on to suffer back to back stoppage losses to Carl Froch in April of 2009, and then to Arthur Abraham just six months later in a super middleweight bout that was part of Showtime’s “Super Six” tournament. Both stoppages were suffered in the closing seconds of the bouts, the Abraham KO being the more severe. It was discovered after his knockout to Abraham, that Taylor had suffered a brain hemorrhage, more commonly known as a brain bleed. It’s the type of injury that ends a fighter’s career, if not his life.

Sidelined for 26 months, Taylor healed, stayed in shape, and was eventually granted a license by the Nevada State Athletic Commission after undergoing rigorous testing by the Mayo Clinic and the Cleveland Clinic’s Lou Ruvo Center for Brain Health in Las Vegas. Not everyone agreed with the decision, but Taylor was back in the ring on December 30th, 2011 and scored an eighth round TKO win over Jessie Nicklow. In April of 2012 Taylor took his second comeback victory, a unanimous decision over Caleb Truax. Truax nearly played the spoiler when he decked Taylor in the ninth round, Truax couldn’t close the show though, and Taylor hung on for the win.

Raul Munoz seems much less a danger than Nicklow or Truax. He’s no stranger to world class opposition; he’s faced plenty of top tier fighters…and lost to them all. Being stopped 11 times in his 15 losses makes him appear to be a pretty easy mark for Jermain, maybe too easy. This may be in part, why Showtime is passing on the live coverage.

If he continues to win, there’s no doubt Taylor will eventually earn a high profile fight against a world class opponent again, and we’ll see him on network television. On Friday though, we just get to see the highlights.