Yes, that is a trademark symbol you see by my name. Since I am a historian/writer/aspiring thespian (not to be confused with lesbian) I must protect my non-existent brand by pompously slapping a trademark symbol on everything I write and sign. 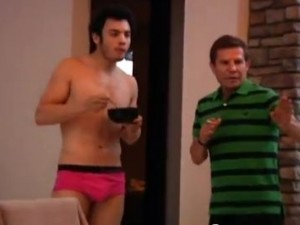 Now as a self-proclaimed boxing historian with knowledge of every and any situation, I took it upon myself to do some investigative journalism. I rubbed elbows with managers, promoters and even signed up for boxing lessons with the world’s best trainers in order to uncover the truth.

During my 45-minute investigation I unearthed a step-by-step guide that outlines the actions one must take to groom a spoiled man-child into a boxing superstar.

When you think of a spoiled, coddled fighter you think of Julio Cesar Chavez Jr. or Adrien Broner. Promoters, managers, television networks, sanctioning organizations, blow-by-blow announcers and the star-struck media are involved in the fabrication of these arrogant and spoiled brats.

So without any further adieu here is your VADA tested, ego-maniacal infested Sh-t List.

1. Picking Opponents That Have No Chance To Win

Your fighter is an investment and you must protect that investment no matter what the cost. Picking a fight you can’t win isn’t smart, you must select a smaller, less talented opponent to showcase your cash cow. Once he gets some experience under his belt you move on to selecting shot former world titleholders to pad your fighter’s record and your bank account.

You need to keep your fighter in the spotlight at all times. The more people that know about him the more money in your wallet. However, you can’t subject your fighter to a true journalist. What you need to do is find a star-fucking writer to push your agenda to the public because not everything goes according to plan.

When your fighter tests positive for a banned substance, what do you do? That’s right you go into damage control and write a press release explaining that his doctor prescribed it to him. Send it off to the media, sit back and relax.

3. Surround Your Fighter With An Entourage of Yes-Men

Babysitting your fighter 24 hours a day is an impossible task. That’s why you need to hire an entourage of yes-men to keep an eye on your prized possession. Don’t worry, you will spend plenty of time sleeping at the foot of your fighter’s bed. There’s nothing wrong with hiring a little help.

These yes-men can double as towel boys, empty out the spit buckets and hold your fighter’s ankles when performing sit-ups.

4. Not Holding The Fighter Accountable For His Actions

Never, under any circumstance, should you hold your fighter accountable for his actions. You must reinforce the idea that he never makes mistakes. Taking any sort of accountability away from your fighter teaches him how to blame others when something goes wrong.

5. Failing To Keep The Fighter In Check

Okay, your fighter has a gambling problem, stays out late partying, drinking and womanizing. What do you do? That’s right, move the party from the dance club to your hotel room.

Remember it’s your job to groom a rude, disrespectful and arrogant douche bag.

What do you do if your fighter fails to make weight on three separate occasions, thus giving him an unfair advantage over his opponent? Just throw a couple hundred dollars at the poor sucker and hope he takes the bait to fight your spoiled brat.

7. Making Your Fighter Think He Is The Center Of The Universe

Start calling your fighter “champ” before he ever accomplishes anything, including winning the WBC interim Latino youth tag team championship. Making your fighter feel special will teach him that the rest of the universe revolves around him. And if he fails to win a world title he could claim to be a “champion of life.”

Alphonso Costello™ is a member of The Sh-it List Makers Association of America (SMAA). You could also find his work at www.FightClubWriter.com