Saturday night in Mexico City, California native and IBF flyweight champ Ava Knight made the most of her south bound road trip, and came home with the WBC Diamond flyweight championship. 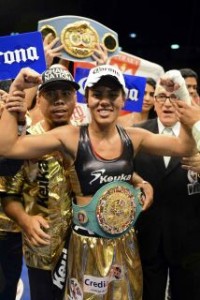 Both women put on an impressive performance, and neither took a step back or stopped throwing punches for the full 10 rounds, but it was Knight who was clearly the sharper and more accurate of the two fighters. Using a solid jab to set up her hooks and body shots, she fended off the attack of Juarez, who landed her fair share of punches but just couldn’t get enough shots in to keep Knight at bay. In the end, scores of 96-94 and 97-93 twice awarded Ava Knight the victory and the WBC Diamond flyweight title.

The loss for Juarez leaves the “regular” WBC flyweight title vacant and snaps a 21 fight win streak for the former champ, who hadn’t lost since 2007. Knight, whose IBF belt wasn’t at stake in this bout, is now 5-0-1 (3 KO’s) in her last six outings.

In Bermuda, what turned out to be an entertaining battle between two middleweights ended in a 10 round majority draw. Bermuda native Teresa Perozzi (9-4-2, 1 KO) and undefeated American Tori “Sho Nuff” Nelson (6-0-2, 0 KO) met in a title unification bout for Perozzi’s WBA title and the vacant WBC strap. Nelson, a former holder of the WBC title now holds the WIBA championship, but that belt wasn’t on the line.

Perozzi fought on the outside, using her jab and straight left in an attempt to keep Nelson away while Nelson worked her way inside and went to work on Perozzi’s body with hooks and uppercuts, occasionally taking her work to the head. After ten hard fought rounds, scores of 95-95 twice and 98-93 in favor of Perozzi ruled the contest a majority draw, leaving the WBC title vacant while Perozzi retained her WBA belt. Both fighters said they were open to a rematch.

In Brandenburg Germany, light welterweight Marie Riederer (13-1-1, 9 KO’s) won a 10 round decision over British sacrificial lamb Angel McKenzie (4-28) to win the vacant WIBF light welterweight title. This was McKenzie’s 10th consecutive defeat, how she ended up in a title bout is anyone’s guess.