This Saturday at the Motorpoint Arena in Sheffield, Yorkshire, United Kingdom, Kell Brook (28-0, 18 KOs) looks to give an impressive afternoon audition for a shot at the IBF welterweight championship winner of  Randall Bailey- Devon Alexander taking place later that same evening in Brooklyn, New York. And he looks to do it against Argentina’s Hector David Saldivia (41-2, 32 KOs). 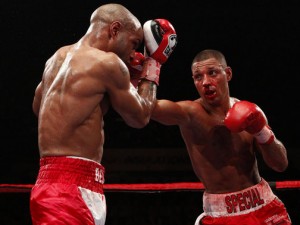 In his last bout, the Sheffield native nearly bit off more than he could chew as he was battered, bloodied, and almost beaten by underrated, old school pug, Carson Jones, en route to a tight majority decision win. The bout was officially an IBF eliminator, sending him to this “final” eliminator against Saldivia.

Carson Jones exposed just about every one of the 26-year-old’s flaws in their war last July, but Brook also proved himself tough and capable of adapting mid-fight. His edge in athleticism gave him an early lead in the bout, but it was pure pride and toughness that kept him in the fight when Jones began applying copious amounts of pressure.

Against the 28-year-old Saldivia, Brook won’t likely face the same issues he faced against the smart, versatile Jones. Saldivia has relatively heavy hands, but is flat-footed, one-dimensional, and unproven at the world class level.

The Argentine’s one venture into contender-land saw him lose to fringe contender, Said Ouali via first round TKO in 2010. The wild 107-second brawl saw Ali hit the canvas once and Saldivia twice before Ali managed to close the show. The bout opened the Floyd Mayweather-Shane Mosley pay-per-view and represented the first time Saldivia had fought in the United States and only the third time he had competed outside of Argentina (he had one bout in Uruguay and one in the Virgin Islands).

Since the loss to Ali, Saldivia has played it safe, fighting regional talent back at home and notching an 8-0 record.

Technically, a win this Saturday will get Brook the winner of Bailey-Alexander, but it’s conceivable that he may err on the side of caution and take another fight or two and feel out the market before pushing for his title shot.

Normally, a guy like Saldivia would have a puncher’s chance this Saturday. But, after having seen Brooks’ ability to absorb punishment and keep his composure against an infinitely better fighter than the Argentine, Saldivia’s chances of getting that one lucky shot are even more remote.

Brook is a true talent and, in his last fight, may have received the kind of seasoning that turns contenders into champions.