The light heavyweight division is no longer the weight class that brought us talents such as Roy Jones Jr. and Michael Spinks or hardcore legends like Archie Moore and Bob Foster. Over the years, the 175 lb. class has morphed into some sort of odd boxing limbo, full of photo ops and media-directed tough talk 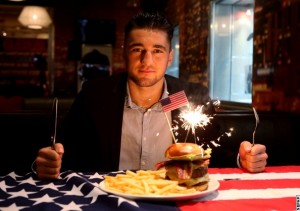 about bouts that nobody really has any intention of making.

Nothing could’ve made this point clearer than the image of WBO light heavyweight titlist and fighting pride of Wales, Nathan Cleverly (24-0, 11 KOs), posing with a bacon cheeseburger and an American flag to announce his upcoming U.S. debut against St. Louis’ Ryan Coyne.

The 25-year-old Cleverly was recently added to the November 10 Abner Mares-Anselmo Moreno undercard at the Staples Center in Los Angeles. And, for those unfamiliar with the opponent selection, it will likely be a frustratingly one-sided mismatch.

Coyne (21-0, 9 KOs) has the type of record and resume cultivated by grad students at the school of professional opponentry. Brought up mostly on the weak Missouri club circuit, the 30-year-old southpaw has never fought anyone even remotely close to world class level and has only managed a meager no. 73 world ranking from Boxrec, the only independent website that actually keeps track of rankings below the top 10 or 20.