According to Mike Brudenell of The Detroit Free Press, legendary boxing trainer and HBO commentator Emanuel Steward has died at the age of 68. While Steward’s family insists that the old man is still alive, the rumor has gained enough traction, and Steward himself remains so gravely ill even if he is, at present, not quite at the point of running up the curtain and joining the choir invisible, that an obit is in order. 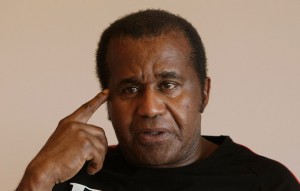 Steward trained several champions, most notably Hall of Famer Thomas “Hit Man” Hearns during Hearns’ title run in the 1980s. Steward also became known for being the guy to call when an underachieving fighter needed a boost to his career and refinement of his technique; Wladimir Klitschko is Wladimir Klitschko due in no small part to Steward’s…well…stewardship. In essence, Steward was Freddie Roach before Roach got everyone and their brother into Wild Card Gym (and in Roach’s case, that had more to do with Manny Pacquiao than with Roach’s merits as a boxing trainer. Steward was a real-deal, old-school boxing guy.)

For your columnist, however, the most brilliant shining memory of Emanuel Steward came on May 18, 2002, with Steward joining Jim Lampley and Larry Merchant for three minutes of the greatest round of mayhem boxing has ever produced: Round 9 of the first Micky Ward-Arturo Gatti fight. Steward, always a trainer at heart, shouted relentlessly at Ward to “go to the body! He needs to go to the body!” after Irish Micky had put Gatti on the floor with that signature left hook of his. Ward, however, had punched himself momentarily out; when Gatti came roaring back with a counter-flurry of his own, filling the dead space, Steward then switched sides like a cross between Mitt Romney answering a debate question and the Soviet audience in the climactic fight of Rocky IV. No longer a trainer, Steward had become just like everyone else watching that fight, a fan with the giddiness of a child seeing his first legitimate boxing war on television. Even after 58 years on the earth and the large majority of that spent around the sport (as a boxer, Steward won his first Golden Gloves title in 1963, 39 years before his night calling the Fight of the 21st Century), Emanuel Steward still had a love of the sport that shone through his words on that greatest of nights.

If you’re still alive, here’s hoping that this greatly exaggerated rumor of your death warms your heart knowing the obituaries will be glowingly positive. And if the rumors are indeed true? Rest in peace, Emanuel Steward. May every fight you see in Heaven be even better than Ward-Gatti I.

In other news, as a relic of boxing’s glorious past fades into history, a clear sign of boxing’s ludicrous, self-destructive present hits the news today. USA Boxing has been suspended for three months by AIBA for some complete bullshit reason involving its head saying some dumbfuck thing about women’s boxers (yes, this coming from a guy who devoted an entire column to women’s boxing being a waste of time and a stupid sideshow, the kettle’s still black), leading the usual gang of idiots in the boxing media to complain that boxing has once again given itself a black eye (really, boxing, I only do it because I love you, just tell them you fell down the stairs again.)

This is, however, a silver lining opportunity. Amateur boxing as currently constituted is the worst thing to happen to the pro game since someone gave Colonel Bob Sheridan an announcing gig. The pitter-pat, shoe-shine style that makes Olympic-style fights an exercise in scoring points rather than winning a fistic contest between two guys who should be in there making every effort to take each other’s goddamn head off carries over to the pros and makes everything from ESPN2 to the ugly-as-hell Bailey-Alexander fight into unwatchable tripe more often than not. Fighters don’t hurt their opponents so much as they jackhammer away at them with jabs that have no bad intentions and “power shots” that are nothing of the kind. For the longest time, this was why Cuban fighters who defected never made it as pros (don’t give me that bullshit about “too much freedom”. Julio Cesar Chavez Junior. Full stop.) That “amateur” style can’t beat anyone who actually knows how to fight—they’ll just walk right through those pitter-patter pussy shots and go to town like Mike Tyson in his prime. Some of those amateurs couldn’t knock me out with that shit.

USA Boxing needs to use this opportunity, and what little clout it has left on the world stage (which after the Olympics ain’t much), to withdraw from AIBA entirely and stage amateur fights that are adequate simulation of what fighters will encounter in the pros. This means ditching the headgear, extending fights from three rounds to a pro-style four or a Contender– or MMA-esque five (to cut down on draws), using 10-point must, and scoring fights on the professional categories of effective punching and ring generalship. By using the amateur system to prepare fighters for the professional ranks, boxing will have, at least in the United States, a feeder system at least as plausible as college football, college hoops and Canadian junior hockey.

The powers-that-be will probably meekly take their medicine, happy for the fact that since this happened in October and will be forgotten by January, they’re even spared Teddy Atlas having to rant about what happened on FNF. SportsCenter won’t even bother with calling Atlas away from whatever it is he’s doing on Staten Island these days in order to make a news story out of it, so much of a joke has USA Boxing become. 2016 will come around, our boys will go to Rio, and none of them will medal there. Meanwhile, the next great champion will be the guy who washes out of the amateur ranks and keeps his dream alive by going pro and beating the snot out of people the old-fashioned way until he catches ESPN’s attention and goes Provodnikov on a few palookas on FNF en route to a title shot.

It’s either that, or the Worldwide Leader will start showing “UFC on ESPN” after the last remaining boxing fan dies of old age. Because that’s what’s going to happen if boxing keeps this crap up.

Fox Doucette covers Friday Night Fights for The Boxing Tribune. His weekly column, The Southpaw, appears on Thursdays. Fan mail, hate mail, and memories of Emanuel Steward can be sent to beatcap@gmail.com.