Just when you thought Denis Lebedev (24-1, 18 KOs) couldn’t surprise us any more, he has just become the WBA cruiserweight champion without even throwing a punch. Considering how he got to be even so much as the “interim” champ (by beating James Toney in a black mark on the sport a year ago), the machinations of the oldest of the alphabet soup organizations come into crisp focus. 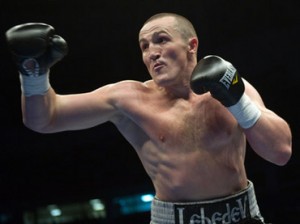 Guillermo Jones could hardly have surrendered any more meekly if he’d rolled over and taken a dive. Panama’s “Big Cat” won the WBA cruiserweight title in September of 2008 and has only defended it twice since then, most recently against no-hoper, Michael Marrone last November. Since then, he has yet to make a defense or give any other indication that he is even still an active fighter. The fight with interim titlist Lebedev was supposed to settle the pecking order, but even that was too much for the Panamanian to bear.

Long and the short of it, this time Lebedev didn’t have to go to the trouble of actually beating up the senior citizen (this would have been his fourth consecutive contest against a fighter older than 37—Jones is 40.) He won a championship without a fight. Whether this makes him a legitimate player in the division would seem to be up to whether the WBA lets him fight a rematch with Marco Huck (to whom Lebedev suffered his only loss) or a unification bout against consensus No. 1 in the division, Yoan Pablo Hernandez.