Top Rank and Nonito Donaire want Jorge Arce. They want to take Arce’s porous defense, wrapped around a weary body, ravaged by sixteen years of battles and they want to feast on his squishy innards. They want to batter the undersized “Travieso” in a highlight reel performance and they want to showcase it as the live fight after the Pacquiao-Marquez replay on December 15.

More accurately, Arum and Team Donaire want to take those guts and splatter them on live TV. 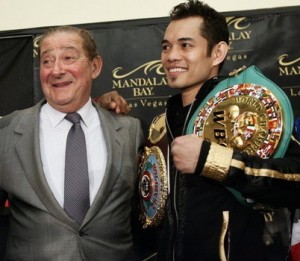 This is the first time Pacquiao and Donaire will be paired together on the same telecast and don’t think for a second that any of this is a coincidence. The plan is to take Pacquiao’s legion of loyal fans and gradually transfer them over to Donaire. A forced passing of the guard from one Filipino to another– Away from a Pacquiao product that has grown stale and a fighter who is closer to retirement than anyone on his payroll cares to admit.

Donaire is the perfect person to take Manny’s place for many reasons. He’s young, charismatic, and supremely talented. But he’s lacking in one major area– Whereas Pacquiao had several major, legend-defining fights, Donaire has been sorely lacking in that area. Lots of solid wins and a couple of highlight reel moments, but hardly anything in the same universe as Pacquiao.

But as much as Donaire’s people want Arce, they need him more. They need him because Arce, of all the available 118-122 lb. fighters, is the only showcase-friendly, well-known fighter who isn’t likely to upset their long-term plans.

Despite Top Rank’s push to make Nonito Donaire a Mr. Everything of the lower weights and the heir to the Pacquiao frenzy, they’re fighting an uphill battle. And whether they care to admit it or not, they’re not succeeding.

There’s nothing in Donaire’s TV ratings or live gate figures that would suggest him being a major star and reactions are mixed in the Philippines, although he’s slowly winning over fans. But forget about a Pacquiao crossover. That sort of internet-buckling groundswell of support only comes once in a lifetime and, frankly, Donaire lacks the magic (and certainly the roll call of potential opponents) to take over Pacland when Manny is gone.

And, while the VADA volunteer year-round PEDs testing thing makes for good public relations, it’s not 100% without a touch of the BS factor. After all, Donaire is working with Victor Conte, who, as an adviser, helped develop VADA’s testing protocol and who, in the past, has bragged, non-stop, about his ability to outsmart any PEDs test.

There’s no shortcut to stardom for fighters at Donaire’s level and at Donaire’s size. Below 140, it’s all hard-road fights with a fighter’s legend growing relative to the weight of his resume. So, no PEDs test or press blitz will turn him from a low-end player to a mainstream star. It’s all about the ring work.

For the longest time, Donaire had been cruising off the strength of one big win– three years of relative nothingness after he knocked out Vic Darchinyan in 2007. Recently, though, Donaire has been fighting the type of fights that guys like him need to make. Solid, top-notch divisional fights against legitimate top 10 guys. Among his recent opponents, star power and mainstream name recognition aren’t there, but that’s to be expected at junior featherweight. There are only a couple of guys at 122 who would even be a minor blip on the casual fan’s radar.

Jorge Arce, for better or worse, is one of those guys. Abner Mares and Guillermo Rigondeaux are the other two.

Arce, with the exception of his shocking upset of Wilfredo Vazquez Jr. in May of 2011, has looked like a spent bullet at 33 years of age. Fighting at least two weight classes above his best weight, the Mexican battler is still eager to go to war, it’s just that the reflexes are slowing, the punch resistance is going, and his people have been very careful with recent opponent selection because of the decline. A Donaire fight would be a cash-out. A human sacrifice at the altar of The Filipino Flash. And, rightfully so, Arce expects it to be worth his while, monetarily. Realistically, the likable brawler is still a star in Mexico and could face South African journeymen and South American no-hopers for decent money well into his 40’s.

Everybody knows what’s up. The young, rising star with the fast hands and a fairly lackluster last several fights wants to augment his rep as a destroyer with an awe-inspiring destruction of a recognizable name. So, the search goes out for a big name, a couple divisions above his ideal, with slowing reflexes and a porous defense. And they want to showcase this supreme demolition at a time when plenty of Manny Pacquiao fans will be watching. Jorge Arce was the logical selection.

The only thing is that Arce and his people actually know the game and they demanded fair compensation for what essentially would be a non-fix set-up.

In boxing, the human sacrifice usually doesn’t balk at the set-up. Often times, he’s so battered and broken by the time he’s brought to the altar that he actually thanks his destroyer for the privilege of being destroyed. In this case, Arce refused to come along quietly. If Nonito wants that highlight reel knockout to cap off a potential Fighter of the Year 2012, he needs to pay for it.

Now, Arum is saying that Donaire-Arce is a done deal and that a press conference will be held to announce the fight later on this week. Maybe so, maybe not.

But if Arum is on the level, it means that Arce got his price and Donaire, in return, got his victim.

You can email Paul at paulmagno@theboxingtribune.com or watch  as he battles fraternal orders and other forces of evil.  Paul is a full member of the Burger King Kids’ Club, a born iconoclast, and an ordained minister in the Universal Life Church.