It’s put up or shut up time for Vanes Martirosyan (32-0, 20 KOs), as he puts his undefeated record on the line against the strongest opponent of his career, Cuban Erislandy Lara (17-1-1, 11 KOs) in a fight that will ostensibly determine WBC champion Saul Alvarez’s next opponent. 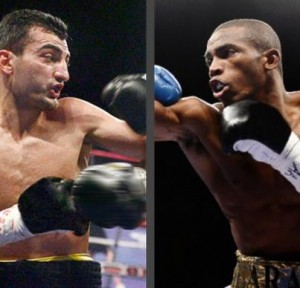 Vanes Martirosyan has faced heavy criticism over the years for ducking opponents that could move him to bigger things while simultaneously calling out the very people he’s ducked. Vanes spoke of knocking out Alfredo Angulo, but when the time came for that fight, it mysteriously evaporated; since those discussions, Vanes has taken Richard Gutierrez to a unanimous decision win and knocked out a completely shot Troy Lowry. The WBC Silver trinket that the Armenian once held has seemingly gone by the boards, with neither the Martirosyan camp nor the WBC itself appearing to be interested in what amounts to an interim title.

For Erislandy Lara, this represents his first big step up in class since a swoon in 2011 that was aided for better and worse in equal measure by the judging. Against Carlos Molina on Friday Night Fights, Lara got a draw that many felt he did not earn; against Paul Williams on HBO, Lara took a loss in a fight that almost everybody thought Williams didn’t earn.

Since those judging errors, Lara has fought and beaten Ronald Hearns (by first-round TKO) and former title challenger Freddy Gutierrez (unanimous decision). Lara is the fighter with the better pro resumé to be sure, and he is 2-1-1 against fighters who have fought for world titles, something Martirosyan has not yet done. Indeed, if you give the Williams decision the other way, the advantage in level of competition and performance against that level goes very, very clearly to the Cuban.

Vanes Martirosyan has a style that is at equal measure thrilling to watch for its potential for brutality and dangerous to Martirosyan for that same reason. It will be critical for the Armenian to hurt Lara and get the Cuban on the defensive, because if Lara is able to effectively counter Martirosyan’s shots, this could be a very short night.

Styles make fights, and Erislandy Lara could not ask for a better opponent for the kind of style he’ll need to win. Martirosyan has to be aggressive to score points and to feel in his comfort zone fighting, but Lara eats those sorts of fighters for lunch. If Lara can time Martirosyan coming in, and your columnist thinks he can, this should be another feather in the cap of a guy who should by all rights still be an undefeated fighter.

Vanes Martirosyan and Erislandy Lara throw down from the Wynn Resort and Casino in Las Vegas on Saturday night, November 10. The show will be televised via HBO at 9:45 PM Eastern and Pacific (with the West Coast getting the fight on tape delay). Stay tuned to the Boxing Tribune for more news and coverage of this fight as news breaks.

Fox Doucette covers Friday Night Fights for The Boxing Tribune. His weekly column, The Southpaw, appears on Thursdays. Fan mail, hate mail, and one of those Cuban pressed sandwiches can be sent to beatcap@gmail.com.