Its been a farcical journey for the Welshman, who only found out his opponent at the beginning of this week after a frantic search for worthy opposition. 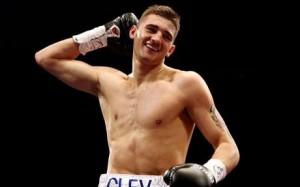 Originally, Cleverly (24-0 11 KOs) was scheduled to fight Vyacheslav Uzelkov in front of a home crowd at the Cardiff Motorpoint Arena, but the bout was scrapped in favour of an undercard slot in the States.

Forums and social media sites seemed to suggest that the switch was predominantly due to poor ticket sales, remember that Cleverly was roundly booed by his countrymen for labouring to a 12 round decision over journeyman fighter, Tommy Karpency.

Cleverly’s challenger on the Golden Boy card was announced as Ryan Coyne, another little known and lowly ranked fighter drawing further criticism from fans and pundits, but Coyne found himself blocked by Don King who claimed management rights over Coyne.

The WBO chimed in with an edict that Coyne would not be approved anyway and that Cleverly could only fight him in a 10 round non title bout so Cleverly’s management team looked elsewhere. Hawk (23-2-1 17 KOs) is coming off a 12 round loss to WBO number 15 ranked Eleider Alvarez in June this year and while Hawk will surely represent game opposition it would be a major upset if Cleverly did not win the fight.

What is more likely, however, is that Hawk takes Cleverly the distance as Karpency did in his last outing, which will not be the sort of performance Cleverly will want to put on and it sounds as though negotiations are ongoing for Cleverly to fight the veteran Bernard Hopkins next in early 2013.

It’s a poor match up but Cleverly must win — and if he wants to restore any credibility, he must win convincingly. I can’t see the win coming like that and I pick Cleverly to win a laborious and dull 12 rounder.