We Americans like our hamburgers greasy, cheesy, and gooey. We like our music full of bluster and exaggerated beats. We prefer an uzi over a handgun. And if some country, somewhere builds the biggest tower in the world, then, dammit, we have to build an even bigger one. 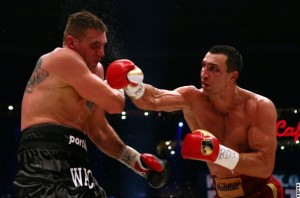 This is a uniquely American attitude, equal parts endearing and repulsive to the rest of the world.

For the last several years, Americans have been pushed to the side of the heavyweight road, forced to watch as two bulldozers cleared all of our vehicles from their path.  It has been a major defeat for those who saw our role as keepers of the crowns in all of the divisions that actually “mattered” — And never let it be said that we are gracious in defeat.

With a few exceptions here and there, the heavyweight division has been the exclusive domain of the American big man– From Jack Johnson to Jack Dempsey to Joe Louis, Rocky Marciano, Muhammad Ali, Mike Tyson, etc.

The last Americans to hold world titles were the less-then-stellar crew of Chris Byrd, Hasim Rahman, Shannon Briggs, and John Ruiz at various points from ’04 to ’07. Before that, you’d have to go back to the turn of the new millennium to find anyone even resembling dominant.

American media has mostly been dismissive of the Klitschko era, passive aggressively describing a Euro-centric heavyweight division as meaningless and worthless. Meanwhile, boxing is electrifying most of Europe, setting attendance and TV ratings records and creating the types of mainstream stars that the American scene could only dream of doing.

Many American fans have followed the media lead, carrying on about the sad state of the heavyweight division and the lack of good, American fighters.

It’s no mystery how the Klitschko brothers became world titlists and it’s no mystery why they have been completely in control of the division for the last six years or so. They brilliantly use their size and physical strength to their advantage and, yeah, they also preside over a relatively substandard heavyweight division. Both factors go hand in hand and add up to the reason the Klitschkos appear to be swimming world record laps in a pool full of floaters.

Whether the Klitschko brothers could beat history’s greatest heavyweights is an argument to be settled by fantasy boxing nerds and video game aficionados. I have my doubts, but that’s not a question any of us can really answer. All I know is that the Klitschkos are King and We Americans have to get over ourselves.

I know it’s tough to feel pushed aside and irrelevant. Heavyweight boxing is now truly an international sport. Baseball, football and basketball have also gone international, but we’ve yet to see international teams threaten the sovereignty of the American pros. Expect a similar backlash of angst if the Kiev Brown Bears suddenly push aside the L.A. Lakers or Miami Heat.

Yes, Wlad and Vitali fight with a cold, dispassionate style utterly foreign to our taste for blood.

And, yes, we’ll just have to keep dealing with endless whining about the death of the heavyweight division from cliche-heavy boxing scribes.

As for me, I’m just going to sit back and appreciate the show for what its worth.

It may not be a golden era for competitive heavyweight action and it may not even be an overly compelling reign of dominant heavyweight champs. But it is what it is. The Klitschkos are King. They’re good, solid fighters who have been dominating the division in their own way. And, for the optimist in me, the division does seem to be getting thicker with 20-something talent.

You can email Paul at paulmagno@theboxingtribune.com or watch  as he bursts every blood vessel in his eyeballs, writing four boxing columns a day.  Paul is a full member of the Burger King Kids’ Club, a born iconoclast, and an ordained minister in the Universal Life Church.