Two division champion, Adrien “The Problem” Broner put on an impressive performance against an over-matched Antonio “DeElbow” DeMarco, registering an 8th round TKO this past Saturday night at the Boardwalk Hall in Atlantic City, New Jersey. 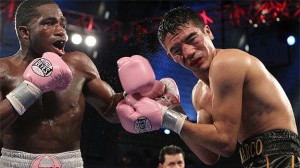 At just 23 years of age, Broner has a very mature set of skills and his ceiling seems quite high at the moment. The Problem should have no problem dealing with most of the talent in the deep 135 pound division given that he continues putting in the work that has got him this far.

What I think: Personally I’d love to see Adrien paired with someone who shares his level of speed and reflexes. A great test for the young Cincinnati native would be Cuban Olympian, Yuriorkis Gamboa.

El Ciclon de Guantanamo, Yuriorkis Gamboa has been absent from the ring for nearly one year since his drubbing of Daniel Ponce De Leon back in September of 2011. After the 50 Cent / Floyd Mayweather collaboration / joint promotional group, TMT fell through, Gamboa’s immediate future has been placed back in the capable hands of big boss Bob Arum and he will be featured on the undercard of the Manny Pacquiao versus Juan Manuel Marquezs’ fourth go-round in December.

Johnathon Banks harnessed the spirit of his long time mentor Emmanuel Steward and knocked out former Michigan State linebacker, Seth Mitchell in the second round of what was supposed to be a showcase for the potential future Klitchko opponent.

What I think: “Mayhem” Mitchell has a good frame to be a heavyweight prizefighter but he’s lacking some important fundamentals and maybe a fighters’ eye (kind of like the eye of the tiger but less feline). He fights well for the lower and mid tiers of the division, but the top of the class will always beat him.

“It’s hard to separate this from the emotional aura of what we’re dealing with here – Emmanuel Steward’s fighter has just scored an incredible upset” … “And lined himself up to fight his own fighter” Jim Lampley and Roy Jones pontificated on the implications of Bank’s surprise victory.

What I think: Wlad will be too much for the Detroit based fighter – too big, too strong. As for Banks knowing how to fight Wladimir? He may pose some challenges early for the Ukrainian world champion, but once the younger Klitchko decides to stop playing friendly it will become a very short and painful night for his American trainer.