The first fight ended in frustration and disappointment for boxers, fans in attendance and TV viewers around the UK and elsewhere

It was supposed to be the showdown that would begin to establish the pecking order in the British super bantamweight division. 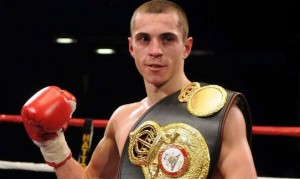 Quigg v Munroe was declared a technical draw after a clash of heads, arising from the clash of orthodox/southpaw styles, opened up a nasty gash above Munroe’s right eye. The fight lasted only 3 rounds and had seen the first two fairly even.

This is just one that had to be done again. Quigg is a rising star, like Frampton. Munroe has been the British #1 at 122lb for sometime and has challenged for a world title. Munroe has ambitions to compete at the elite level again. Quigg stands in his way.

The fight, taking place on the undercard of Hatton v Senchenko at the MEN Arena, Manchester this Saturday night is for the ‘interim’ WBA World title.

If they can keep their heads apart, this one could be the bout of the night. They were shaping up to be competitive back in June and assuming Munroe has healed well and doesn’t show too much wariness then this fight should go the distance but my original call was for the youth of Quigg to prevail and I see no reason to deviate from that this time.